Teams have until 3pm CT to trim their rosters to the regular-season 53-man limit. The Commanders have done so but did it without moving Brian Robinson off the roster.

Shot twice in the lower body Sunday, Robinson underwent surgery. Ron Rivera also expressed optimism the third-round rookie could play this season. Washington is following through on these hopes, keeping the rookie running back on its active roster. Here are the moves the Commanders made to reach the 53-man max Tuesday:

By keeping Robinson on their active roster, the Commanders opened the door to him not only playing in 2022. The team needed to carry the Alabama product through to its 53-man roster today in order to place him on short-term IR. An IR placement today would have ended Robinson’s season.

One of the gunshot wounds Robinson sustained hit his knee, but the bullet did not seriously damage ligaments, tendons or bone, Mike Garafolo of NFL.com reports (video link). It is not a lock Robinson returns this season, per Garafolo, but the team is keeping its options open.

Robinson playing as a rookie would be obviously be a remarkable development. Prior to being shot, the Day 2 draftee had made a serious charge at the Commanders’ starting running back role. The team’s primary starter over the past two seasons, Antonio Gibson, remains on the roster, as do J.D. McKissic and Jonathan Williams. Robinson being moved to IR later this week will sideline him for at least four games — likely much longer, in this case — but allow him to return later this season, should he be cleared to do so.

The Chiefs, per ESPN.com’s Field Yates (on Twitter), also submitted a claim for Blanton recently, when the Rams waived him. It will be interesting to see if the young tight end generates any interest this week. Martin has generated consistent interest on the wire. The Commanders, who drafted the guard during the Bruce Allen regime, have made two waiver attempts to land him. The second one, earlier this month after the Jaguars cut Martin, was successful. It would not surprise if Martin is brought back via the practice squad — as several of Tuesday’s cuts will be — but he could also bring more interest on the wire.

8:10pm: The Packers acquired a 2023 seventh-round pick, according to ESPN’s Adam Schefter (on Twitter).

11:46am: A year into his career, Cole Van Lanen is being traded. The Packers are sending the 2021 sixth-round pick to the Jaguars, Rob Demovsky of ESPN.com tweets. 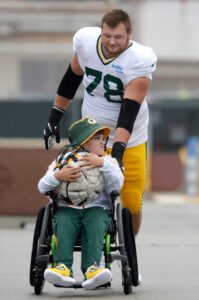 Jacksonville will create a roster spot by cutting guard Wes Martin, Jeremy Fowler of ESPN.com notes (on Twitter). Not yet a vested vet, Martin generated waiver interest earlier this year and will head back to the wire.

The Packers will receive an undisclosed draft pick for Van Lanen, a Green Bay native. A Wisconsin alum, Van Lanen played in one game with the Packers, despite a flood of injuries along their offensive line in 2021. The Jaguars will take a flier here.

Wisconsin’s primary left tackle from 2019-20, Van Lanen earned second-team All-Big Ten acclaim in ’19 and first-team honors in the truncated 2020 season. The Packers had been using Van Lanen at tackle and guard during his short stay with his hometown team, Tom Silverstein of the Milwaukee Journal Sentinel tweets. The Packers drafted offensive linemen in the third, fourth and seventh rounds this year (Sean Rhyan, Zach Tom, Rasheed Walker).

Both the Chargers and Commanders put in claims for Martin in May, when the Giants cut him. Washington originally drafted Martin in the 2019 fourth round and used him as a starter at points during his first two seasons. Martin, 26, started 10 games for Washington from 2019-20 and played in seven Giants games last season.

Guard Wes Martin, who was waived by the Giants last week, generated a fair amount of interest on the waiver wire. The Jaguars have top waiver priority due to their league-worst 3-14 record in 2021, so they were awarded the Indiana product when they put in a claim, but as ESPN’s Field Yates tweets, the Commanders and Chargers put in claims as well.

Had Washington’s claim been successful, it would have represented a reunion for player and team. The Commanders made Martin a fourth-round pick in 2019, and he started 10 games for the club over the 2019-20 seasons. He did not survive the 53-man cut in advance of the 2021 campaign, though he signed with Washington’s p-squad after clearing waivers. He was poached by the Giants in late September and ultimately appeared in seven games (one start) for Big Blue.

With the Commanders, Martin would have served as useful guard depth behind presumptive starters Andrew Norwell and Trai Turner, both of whom were signed this offseason. The Chargers likewise appear to be on the lookout for interior OL reinforcements behind Matt Feiler and first-round rookie Zion Johnson.

In Jacksonville, Martin is obviously not going to unseat the newly-acquired Brandon Scherff at right guard, though he could theoretically push 2020 fourth-rounder Ben Bartch for the starting LG gig. Bartch started 11 games for the Jags in 2021 and played well at times, though his 62.1 overall grade from Pro Football Focus is underwhelming. 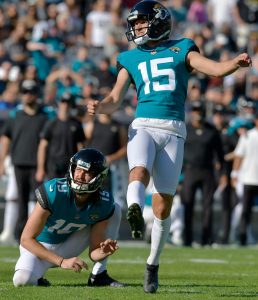