Dolphins guard Liam Eichenberg was carted off the field in this Sunday’s trip to Detroit. The injury isn’t as serious as initially feared, but it appears Eichenberg has suffered an MCL injury and will miss some time, according to Tom Pelissero of NFL Network.

Miami will have options to replace Eichenberg. Michael Deiter started eight games at center last year for the Dolphins and 15 games at Eichenberg’s left guard position in 2019. Brandon Shell and Greg Little are also options with plenty of starting experience, albeit at tackle. Robert Jones is also an option after starting a game last year.

Here are a few other injury updates from around the NFL:

The Commanders are planning to open Chase Young‘s practice window next week, Ron Rivera said Thursday. Designating Young to return off the reserve/PUP list will give the former Defensive Rookie of the Year three weeks to be activated. Young has not played since suffering a right ACL tear, and his reconstructive surgery required a graft from his left patellar tendon. This pushed Young’s timetable to midseason. Washington has used James Smith-Williams (two sacks) alongside Montez Sweat (three) this season. The team has been cautious with Young, who last played on Nov. 14, 2021, doing so despite Rivera not exactly being on a tepid seat.

In a sequence of events that no one ever wants to see, the Giants had four players leave their final preseason game this Sunday with injuries. Backup quarterback Tyrod Taylor was carted off the field after a vicious hit to the chest by Jets pass rusher Micheal Clemons. New York also saw three players leave the game with concussions, but only one of them made the final roster: tight end Daniel Bellinger.

Head coach Brian Daboll has insisted that Taylor’s back injury is not serious, according to Darryl Slater of NJ.com. This is great news for Giants fans who may have worries that starting quarterback Daniel Jones will continue his trend of not being able to appear in every regular season game the Giants play. Since being drafted in 2019, Jones has missed at least two games each year, sitting out of six contests over the past year alone.

The Bellinger-concussion is significant as the fourth-round rookie out of San Diego State is currently set to start at tight end for New York with Ricky Seals-Jones on injured reserve to start the year. Going into the season as a rookie starter, Bellinger needs all the practice he can get before the season opener in Nashville.

Here are a couple other injury updates from around the league, starting with some good news from the Hoosier State:

The Giants have a new-look TE room in 2022, but the first piece of news at the position as training camps are set to open isn’t a positive one. The team announced on Thursday that rookie Daniel Bellinger has been placed on the active/PUP list with a quad injury. 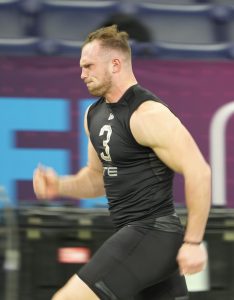 The San Diego State alum signed his rookie deal earlier this week, allowing him to shift his attention to a training camp which should provide him every opportunity to carve out a significant role in the Giants’ offense. New York no longer has Evan Engram or Kyle Rudolph at the position, so a starting role is available to be won this summer.

Bellinger’s lack of production in college (no more than 357 receiving yards in a single season) contributed to his name not being called until the fourth round of the draft. Still, his time with the Aztecs showcased a combination of receiving and blocking skills which should give him a path to playing time right away in the NFL. Bellinger received first-team reps during spring workouts, so his absence will be felt when veterans report to camp next week.

Other than Bellinger, the Giants currently have veterans Ricky Seals-Jones and Jordan Akins on the roster. They will see an uptick in practice snaps while Bellinger recovers from the injury, the severity of which is unknown. Fortunately for Big Blue, he can be activated at any time, allowing him to continue getting acclimated to an offense much in need of a step forward in 2022 when he is able to do so.

Another member of the Giants’ rookie class has officially inked his first NFL deal. The team announced on Monday that tight end Daniel Bellinger has signed his rookie contract.

Bellinger spent five seasons at San Diego State, taking on a significant role starting in his second campaign. He didn’t put up the receiving numbers of other, more highly-touted prospects at his position at any point during his tenure with the Aztecs, though his best production came in his final season. He totalled 357 yards on 31 receptions, while showcasing the athleticism which had many draft analysts noting he was likely underutilized in the team’s offensive system.

Despite the relatively pedestrian production Bellinger put up across his 43 college contests, he could have a path to significant playing time as a rookie. New York no longer has Evan Engram or Kyle Rudolph on the roster, so the six-foot-six, 255-pounder saw reps with the first-team offense during the spring. With a (presumably) healthy Saquon Barkley and a pass-catching corps including Kenny Golladay, Kadarius Toney and second-round rookie Wan’Dale Robinson, though, Bellinger likely won’t see many targets early on during his time in the Big Apple.

Bellinger will be competing for a starting spot with veterans Ricky Seals-Jones and Jordan Akins, both of whom signed one-year deals this offseason as stopgaps in the absence of Engram and Rudolph. If not immediately, then in the near future at least, he should be able to take on a significant role as the team looks to take some much-needed steps forward on offense.

Given today’s news, nine members of the Giants’ draft class have now been signed. Only Robinson and fourth-round safety Dane Belton have yet to finalize their contracts.

The Giants‘ long-rumored James Bradberry separation leaves them thin at the cornerback position. Although Big Blue should not be ruled out of a veteran addition here, the team is turning to one of its holdovers to fill Bradberry’s spot. Aaron Robinson, a 2021 third-round pick, is the early favorite to start on the outside opposite Adoree’ Jackson, Ralph Vacchiano of SNY notes. A 2021 third-round pick out of Central Florida (by way of Alabama), Robinson played in just nine games last season and made two starts. Despite beginning the season on the PUP list due to an offseason core surgery, Robinson played 243 defensive snaps as a rookie. The Giants also have 2021 slot corner Darnay Holmes as a possible outside option in Don Martindale‘s defense, per Vacchiano, with third-round rookie Cor’Dale Flott competing with Holmes for the slot gig.

If the Giants are to pursue vets, many are available. Kevin King, Xavier Rhodes, Joe Haden and Trae Waynes remain free agents, as does ex-Martindale Ravens charge Jimmy Smith, though he has battled injuries and is going into what would be his age-34 season. Here is the latest from around the NFC East: