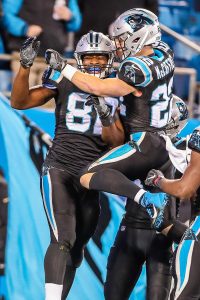 Manhertz is primarily a blocking tight end. After stops with the Bills and Saints, he found his way to the Panthers in 2016. In 2017, he found a regular role in the offense and got even more playing time while Greg Olsen was out with injuries. For his career, he has 70 starts with just 12 catches for 142 yards and one touchdown.

The Panthers re-signed tight end Chris Manhertz, as Adam Schefter of ESPN.com tweets. Manhertz was scheduled to be a restricted free agent this offseason, but he’ll instead return on a new two-year deal.

Manhertz began training camp on the PUP list thanks to a Jones fracture in his left foot. Fortunately, he rebounded in time for the season and saw a larger role during Greg Olsen‘s absence. The 26-year-old (27 in April) appeared in all 16 games and started in four, playing primarily as a blocking tight end. He had just two catches on the year for 52 yards, bringing his grand career total to five grabs for 79 yards. He did, however, catch his first touchdown pass in Week 15 against the Saints.

Terms of the deal are not yet known, but Manhertz will presumably see a bump from his 2018 salary of $630K.

The Saints announced that they have promoted wide receiver Jake Lampman. To make room on the roster, the team has waived tight end Chris Manhertz.

Lampman, 23, joined the Saints as a UDFA out of Ferris State this offseason. When he didn’t make the team’s final cut, he signed on with the practice squad. In his final collegiate season, the wide receiver hauled in 52 passes for 731 yards and eight touchdowns.

Manhertz became expendable this week when Josh Hill returned to practice after dealing with a high ankle sprain. Manhertz was on the field for 43 snaps this year while Hill was sidelined but drew zero targets.