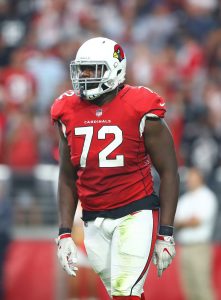 Pierre, like new Giants safety Antoine Bethea, will offer New York familiarity with defensive coordinator James Bettcher‘s scheme, as Bettcher coached Pierre in Arizona in 2017. A Miami product, Pierre posted 5.5 sacks and nine quarterbacks in his year under Bettcher. Last season, his production dipped before he was placed on injured reserve with a knee injury in December.

Pierre will play five-technique defensive end in Bettcher’s 3-4 scheme. The Giants are currently projected to start Dalvin Tomlinson and R.J. McIntosh in those spots, and given that both played relatively well in 2018, Pierre may slot in as a reserve.