2:35pm: More testing revealed bad news for the rookie. Penning suffered a ligament tear in his injured foot, and Rapoport adds surgery will be necessary (Twitter link). The player the Saints eyed as a long-term left tackle will not be beginning his season on time and will be out indefinitely.

9:28am: It sounds like Saints first-round pick Trevor Penning is going to miss some time. The offensive lineman suffered a “bad case of turf toe” during last night’s preseason finale, according to NFL.com’s Ian Rapoport (on Twitter). 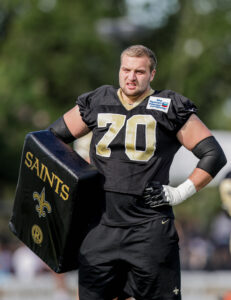 Penning is set to undergo an MRI to determine the severity of the injury. Rapoport hints that the offensive tackle will miss at least a game or two to start the season. We’ll likely get more clarity on his roster status (and whether he’ll land on injured reserve) once the Saints cut down their roster to 53 players.

The offensive tackle got into 10 snaps last night before suffering the injury. According to Charean Williams of ProFootballTalk.com, Penning suffered the injury when tight end Juwan Johnson accidentally hit the back of his leg during Mark Ingram‘s one-year touchdown run. Penning walked to the sidelined before getting carted to the locker room.

The Northern Iowa product was selected by the Saints with the 19th-overall pick in this year’s draft, and he was expected to replace the departed Terron Armstead in the starting lineup. The rookie made headlines during training camp when he got into fights with teammates for three consecutive days. Pro Football Focus showed him taking a major step in New Orleans’ second preseason game, but the latest injury may have cost him his early-season opportunity to snag the starting gig. James Hurst has been listed atop the Saints depth chart at LT throughout the preseason, and while the veteran is dealing with his own foot injury, he’s a good bet to earn the starting nod with Penning temporarily out of the picture.

Following a spree of cost-cutting or cost-reorganizing moves to get under the cap, the Saints made a depth signing Monday.

They will retain offensive lineman James Hurst, the team announced. Hurst will make $9MM over three years on his latest Saints accord, Jeremy Fowler of ESPN.com tweets.

The Saints initially added Hurst last year and used him as a swing backup and spot starter. The veteran offensive lineman has the ability to contribute at tackle and guard. This represents nice money for a second-string-type option.

A longtime Ravens blocker, Hurst started five games for the Saints last season. While it is unknown if he will block for Taysom Hill or Jameis Winston in 2021 (perhaps both?), he will be back with the Saints.

The Saints made some notable cuts on their defensive line, dropping Edwards and Hunt. The former played with New Orleans last season, while the latter was an offseason addition. The Colts cut Hunt earlier this year, doing so after previously extending him. However, New Orleans does have Malcom Brown back and re-signed David Onyemata in March. The Saints are pursuing Jadeveon Clowney as well.
Alonso suffered a torn ACL in the playoffs last year. He will miss at least six games. The Saints signed Fowler over the summer. The former Broncos auxiliary receiver worked out with Drew Brees and Emmanuel Sanders during the pandemic-induced NFL hiatus.
Stevens, like most of the players cut Saturday, profiles as a practice squad candidate. The Saints became involved in a strange controversy over the seventh-round pick, whom the Panthers coveted. It will be interesting to see if Carolina submits a waiver claim on Stevens. 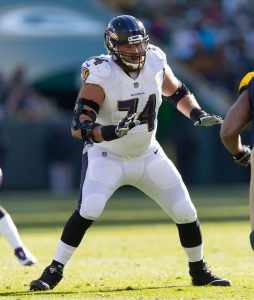 The Ravens have released offensive tackle James Hurst, as ESPN.com’s Jamison Hensley tweets. Hurst was suspended for the first four games of the 2020 season. Now, he’ll try to hook on elsewhere.

Hurst appeared in all 16 games for the Ravens in 2019 and made a pair of starts. In February, he went from on-the-bubble to a likely goner when the league handed him a one-month ban for performance-enhancing substances.