One of the Falcons’ few Super Bowl LI cornerstones still with the team, Deion Jones will be sidelined for a while. The veteran linebacker underwent shoulder surgery recently, and he will not be ready until training camp. 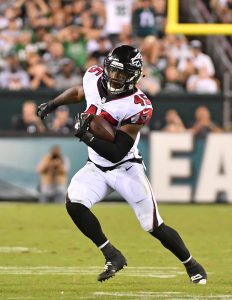 This operation, which Arthur Smith called a cleanup procedure (via the Atlanta Journal-Constitution’s D. Orlando Ledbetter), further complicates Jones’ status. The only way for the Falcons to generate any kind of cap savings by parting ways with the veteran linebacker would be a post-June 1 trade. Jones’ surgery stands to hit pause on those rumors for a while.

A 2016 second-round pick, Jones has anchored Atlanta’s linebacking corps throughout his career. He has already returned five interceptions for touchdowns. Only three linebackers — Hall of Famers Derrick Brooks and Bobby Bell and longtime pro Karlos Dansby — have notched more pick-sixes (six apiece) in NFL history. The six-year starter made 137 tackles under new DC Dean Pees last year. Jones, however, has not made a Pro Bowl since 2017 and carries the highest cap number on the Falcons’ payroll — by a wide margin.

Tied to a $20MM cap figure this year, Jones has two seasons left on his contract. Thanks to two 2021 restructures, the Falcons releasing Jones after June 1 would slam them with $18MM in dead money and save them barely $1MM. The team already has $63MM in dead-money charges, much of that from the dead-money record ($40MM) on Matt Ryan‘s contract, but the regime that drafted and extended Jones is gone. The Athletic’s Jeff Schultz recently tabbed Jones as almost certain to depart Atlanta soon.

Once healthy, Jones will be worth monitoring as a trade candidate. While teams might be leery of the $9.6MM (guaranteed) and $11.9MM (nonguaranteed) salaries he is due over the next two years, the LSU product is still just 27 and has missed only one game over the past three seasons. Jones deferred $4MM of his 2021 salary to 2022; the Falcons already paid that out as a March roster bonus. A post-June 1 trade would save the Falcons more than $10MM, though they would likely collect a low-level return.

Atlanta signed ex-Titans first-rounder and Pees charge Rashaan Evans in April and drafted Troy Andersen in Round 2. Despite losing Foyesade Oluokun in free agency, the team also added Nick Kwiatkoski late in free agency and has Mykal Walker returning as well. It will be interesting to see if the Falcons hang onto Jones or if he will be another piece moved as the team rebuilds.