5:35pm: The Floyd market moved fast. The Giants pushed to sign him, but the Rams will win the sweepstakes, Anderson tweets. Floyd will stay in Los Angeles on a four-year, $64MM deal, Adam Schefter of ESPN.com tweets.

This represents a major win for Floyd, who saw the Bears release him prior to his fifth-year option vesting in 2020. Floyd will follow Fowler in riding a Rams contract year into free agency success. The Rams are making their biggest commitment to an edge defender in years here, doing so after trading Robert Quinn and letting Fowler walk. The team’s journey toward cap compliance will continue, however, with the team now having three front-seven bastions — Donald, Floyd and Michael Brockers — signed to veteran deals.

5:15pm: Although the Rams let Dante Fowler walk in free agency last year, they are not quite ready to lose another edge rusher. They remain in talks with Leonard Floyd, according to veteran NFL reporter Josina Anderson, who notes the discussions are going well (Twitter link).

The Rams will still need to clear considerable cap space to keep Floyd. They reside more than $30MM over the cap. Teams must comply with the $182.5MM salary ceiling by 3pm March 17, when the 2021 league year starts.

Like Fowler, Floyd produced in a contract year. The former Bears first-round pick, whom Chicago cut after an inconsistent tenure, recorded a career-best 10.5 sacks while teaming with Aaron Donald in Los Angeles. After battling injury issues early in his career, Floyd has now played in 16 games in each of the past three seasons.

More edge rushers are available this year, compared to a 2020 offseason in which several received franchise tags. Like Fowler, Floyd did not. And he is in much better position to land a strong deal than he was last year, when the Rams signed him to a one-year pact worth $10MM. It will be interesting to see if Floyd can improve on that salary soon.

5:34pm: This market moved fast. The Giants’ push for Floyd did not end in a deal. The Rams are bringing him back. Although other edge rushers remain available, the market is thinning. Floyd, Yannick Ngakoue and Matt Judon have chosen their teams.

5:31pm: Featuring an edge-rushing need for a couple of years now, the Giants are trying to poach the Rams’ top outside sack artist. They are making a push to sign Leonard Floyd, per Dianna Russini of ESPN.com (on Twitter).

The Rams have not given up on re-signing Floyd; they remain in talks with the former first-round pick. The Giants are not in the finalizing stage yet here, Russini adds, so a bidding war may be taking place.

A Floyd agreement would be interesting for the Giants, who have used their franchise tag on Leonard Williams. A two-Leonard front seven would make re-signing Dalvin Tomlinson quite difficult. The Williams tag has left the Giants with less than $3MM in cap space, so the team still has moves to make ahead of the March 17 start to the 2021 league year.

The Rams are making their first big splash of free agency. Los Angeles is signing outside linebacker Leonard Floyd to a one-year deal, Adam Schefter of ESPN.com tweets.

It’s a $10MM deal that can be worth up to $13MM, Schefter reports. Floyd was cut by the Bears yesterday when Chicago signed fellow outside linebacker Robert Quinn, and it didn’t take him very long to find a new home. We heard word that the Giants were interested in Floyd, so Rams GM Les Snead likely had competition for his services. Floyd would’ve earned $13.2MM in 2020 under his fifth-year option had the Bears kept him, so his release won’t end up hurting him too much financially if at all.

The ninth overall pick back in 2016 Floyd was a bit of a disappointment in Chicago, but he’ll now get the chance to prove himself and re-enter unrestricted free agency at this time next year. The Georgia product became a starter as a rookie and showed plenty of flashes, racking up seven sacks in 12 games in his first year as a pro.

Unfortunately he never really progressed from that point, and his sack totals actually declined in each of the past three years. Still only 27, he has a lot of theoretical talent. He’ll slide in more or less as the replacement for Dante Fowler Jr., who just left the Rams to sign a three-year, $48MM deal with the Falcons less than an hour ago.

When the Rams next take the field looking to put their disappointing 2019 season behind them, their defense is going to look quite a bit different. Not only did they trade away cornerbacks Marcus Peters and Aqib Talib midway through last year, they’ve now seen a string of departures in free agency.

Safety Eric Weddle retired; Cory Littleton, Michael Brockers, and Fowler Jr. have now all departed in free agency, and the team just declined their option on usual slot corner Nickell Robey-Coleman. They’ve also replaced defensive coordinator Wade Phillips with Brandon Staley, so it’s safe to say that side of the ball is getting a complete makeover after Sean McVay’s dissatisfaction with the previous structure became evident.

Linebacker Leonard Floyd was cut by the Bears earlier today, but he’s already got several suitors lining up. NFL Network’s Mike Garafolo tweets that the Giants are among the teams that are in play for Floyd.

There were high hopes for Floyd when the Bears selected him in the first-round of the 2016 Draft. The Georgia product had a productive rookie campaign, compiling seven sacks.

While the linebacker put up solid numbers in the subsequent three years, his sack numbers have dropped each season. The 27-year-old finished the 2019 campaign with 40 tackles and three sacks.

Floyd was set to earn $13.2MM in what was his fifth-year option year. That would have been tough to juggle after the Bears inked pass-rusher Robert Quinn to a lucrative five-year deal.

The Giants have been active in adding linebackers this week. They signed a pair of former Packers linebackers in Blake Martinez and Kyler Fackrell.

In one fell swoop, the Bears have revamped their pass rush. On Tuesday, the Bears agreed to a five-year, $70MM deal with Robert Quinn, according to NFL.com’s Ian Rapoport (on Twitter). Meanwhile, they also released former first-round pick Leonard Floyd (Twitter link via ESPN.com’s Adam Schefter). 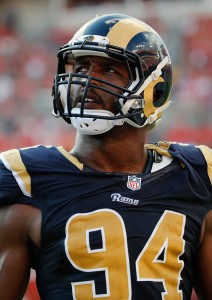 Quinn’s deal includes $30MM fully guaranteed, giving him solid security over the course of the deal.

The Cowboys worked to keep Quinn, but the numbers crunch didn’t quite allow for that. Dallas, of course, came into the offseason with even bigger fish to fry, including negotiations with quarterback Dak Prescott and wide receiver Amari Cooper. They already watched as cornerback Byron Jones left for the Dolphins, and now they’ll be losing another key member of their defense.

Quinn was the comeback kid in 2019, notching 11.5 sacks for Dallas. It was a resurgent year for the veteran, who had a rocky stretch following his last Pro Bowl appearance in 2014.

There were high hopes for Floyd when the Bears selected him in the first-round of the 2016 Draft. The Georgia product had a productive rookie campaign, compiling seven sacks. While the linebacker put up solid numbers in the subsequent three years, his sack numbers have dropped each season. The 27-year-old finished the 2019 campaign with 40 tackles and three sacks.

Floyd was set to earn $13.2MM in what was his fifth-year option year.

We heard back in December that the Bears could part ways with outside linebacker and former first-round pick Leonard Floyd this offseason. Last May, Chicago exercised Floyd’s fifth-year option, which would keep him under contract through the 2020 campaign at a salary of $13.2MM, but as of right now, that salary is guaranteed for injury only. As such, the Bears could cut Floyd and obtain $13.2MM of cap space.

However, they would need to do that soon, because the salary becomes fully guaranteed when the new league year begins on March 18. And as Brad Biggs of the Chicago Tribune writes, some believe that GM Ryan Pace will indeed release Floyd within the week.

Floyd has by no means been a bad player, and he has been a full-time starter since his rookie campaign. But after posting seven sacks in 12 games in 2016, those numbers have tailed off considerably. He has accrued just 11.5 sacks in the last three seasons, and Pro Football Focus’ advanced metrics pegged him as just the 53rd-best edge defender in 2019. He managed 27 QB hurries in 2019 after 30.5 in 2018, but he has not yet been able to convert those hurries into sacks on a regular basis.

“He’s close in a lot of areas when you look at the pressures and those things,” Pace said. “He just needs to finish a little better on the quarterback.” While acknowledging that the team would like to see more sack production out of Floyd, Pace did say that Floyd’s versatility and his coverage abilities make him an asset.

Still, $13.2MM is a lot for a solid but replaceable player, especially since the Bears don’t have a ton of cap room to work with. While the top edge rushers who would otherwise be eligible for free agency are likely to remain with their current teams, players like Kyle Van Noy and Vic Beasley could be available, and Pace could also turn to the draft.

A Floyd trade or paycut is unlikely, according to Biggs.