Although the Bills had hoped Von Miller would be back this season, the veteran pass rusher did end up undergoing surgery. The exploratory procedure will knock him out for the rest of the season, Sean McDermott said Wednesday.

While Miller was not believed to have torn his ACL, this procedure ended up addressing that ligament. The operation revealed Miller’s ACL was torn, the team announced, and it has now been repaired. This procedure was not intended to repair Miller’s ACL, according to Ian Rapoport of NFL.com (on Twitter). Instead, it was aimed at repositioning Miller’s lateral meniscus. After previous tests did not reveal a tear, the surgery ended up doing so. Miller would have been able to return this season if only the meniscus was repaired, Rapoport tweets. 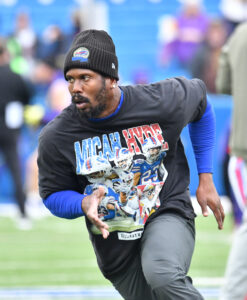 Carted off during the Bills’ Thanksgiving Day game, the future Hall of Fame edge rusher had hoped to return after missing just one contest. Then, the Bills placed him on IR. This steadily worsening timetable will now leave the Bills without their top pass rusher as they attempt another Super Bowl push. The Chiefs’ loss to the Bengals opens the door for the Bills (9-3) to win out and claim the AFC’s top seed. Their hired gun was to be a big part of their championship push; the team will now have to get by with its young edge defenders carrying the load.

Wounding the Bills’ defense, this injury deals a blow to this era’s best edge rusher. Miller’s age-33 season wraps with his second ACL tear. He suffered the first such injury — in the same knee — back in December 2013. That season resulted in the Peyton Manning-led Broncos advancing to Super Bowl XLVIII without him, but Denver’s injury-plagued defense could not hold up in that game. Miller rebounded to play the lead role in the Broncos winning Super Bowl 50 two years later, but he has now suffered severe leg injuries in two of the past three years. A late-summer ankle injury wiped out Miller’s 2020 campaign.

The 2020 injury did not end up stopping Miller from playing a major role in the Rams’ Super Bowl LVI-winning effort, which catapulted Miller into free agency. The Bills won the sweepstakes with a six-year, $120MM deal that featured guarantees into Year 3. Miller cited that guarantee structure as the reason he chose the Bills over the Rams. That and the chance to be the rare player to win a Super Bowl with three different teams. Miller stands to be back for Buffalo’s Super Bowl push next season, but he will now have to battle back from another major injury — and do so in his mid-30s.

Miller still leads the Bills with eight sacks, but two of the Bills’ recent highly drafted D-ends — Greg Rousseau and A.J. Epenesa — have shown improvement. Rousseau, a 2021 first-rounder, has registered five sacks; Epenesa, a 2020 second-round choice, has tallied 4.5. Those are each career-high totals. Though, Miller being removed from the equation will make the younger edge rushers’ work more difficult. The team also has former second-round pick Boogie Basham and reacquired veteran Shaq Lawson in the fold. The Bills are already playing without safety Micah Hyde, who was lost to a season-ending injury in September.