Despite acquiring Baker Mayfield less than two days ago via waivers, the Rams are already considering giving him game work. There is a “real chance” the former Browns and Panthers starter plays for his new team Thursday night, Tom Pelissero of NFL.com tweets. 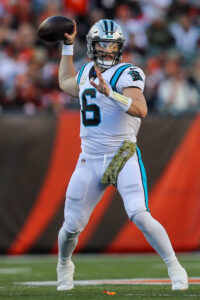 It seems the team’s preference is for John Wolford to make another start, but Adam Schefter of ESPN.com notes (via Twitter) that Matthew Stafford‘s original backup not being healthy enough to return from a neck injury would lead to Mayfield getting the nod against the Raiders. This would be quite the step for the recently relocated quarterback, especially when considering the Rams’ mini-bye ends with a Week 15 Monday-night game. Wolford, who has made two starts for the Rams this season, is listed as questionable.

Being informed he would be demoted to Carolina’s third-string quarterback, Mayfield requested to be cut. The Panthers obliged. Only the Rams submitted a claim. Mayfield is believed to be up to speed on the Rams’ Week 14 game plan, per Pelissero, though he will presumably be quite limited for functionality in Sean McVay‘s offense at this point. Mayfield last started in Week 11 — a 13-3 Panthers loss to the Ravens.

Mayfield is both going through the worst season of his career and potentially set to take the reins for a Rams team having (thus far) the worst season by a defending Super Bowl champion. The Rams’ 3-9 record is the worst by a defending champ through 12 games. No quarterback has finished a season with a worse QBR figure than Mayfield’s 17.8 number since 2010. Los Angeles is without Cooper Kupp, Allen Robinson and multiple offensive line starters. The team let left guard David Edwards‘ injury-activation window close Wednesday; the veteran starter is now out for the season.

Stafford’s IR stay created a void for the Rams at quarterback. Although Bryce Perkins made a start against the Chiefs two weeks ago, Mayfield looks to have already surpassed him in L.A.’s pecking order here. Mayfield is on the Rams’ payroll at $1.35MM for the rest of the season. How he fares down the stretch stands to affect his market and potentially a future Rams compensatory draft pick, in the event the parties part ways at season’s end.