Matthews reportedly underwent a meniscus operation earlier this month, but was expected to be removed from Tennessee’s PUP list at some point this week. The 28-year-old agreed to an odd one-year extension last week, a self-negotiated deal that will tack on what is essentially a 2019 option onto his current pact. Matthews can earn $7.75MM next season, but there’s no guaranteed money associated with that year.

In 2017 (his second season with the Titans), Matthews posted 53 receptions for 795 yards and four touchdowns, all of which were tops among Tennessee’s receivers. This year, Matthews is projected to start alongside 2017 first-rounder Corey Davis, while another 2017 rookie — third-round pick Taywan Taylor — should enter in three-wideout looks.

Campanaro, meanwhile, inked a one-year, minimum salary benefit deal with the Titans in April, but rarely participated in either camp or Tennessee’s preseason contests. Primarily a return man, Campanaro could conceivably be released from injured reserve in the coming weeks if he works out a settlement with the Titans.

The Titans have agreed to terms on a one-year deal with free agent wide receiver Michael Campanaro, reports Jeff Zrebiec of the Baltimore Sun (Twitter link). 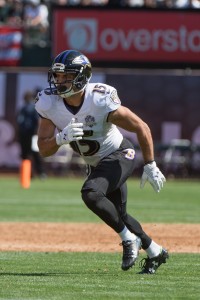 Tennessee had been searching for a new slot receiver, as 2017 slot man Eric Decker is currently a free agent. The Titans also hosted Jordan Matthews before he signed with the Patriots, and while he and Campanaro are very different receivers, they’ve both spent most of their time inside. At present, Tennessee’s wideout depth chart is topped by Rishard Matthews and 2017 first-rounder Corey Davis, with Taywan Taylor, Tajae Sharpe, Darius Jennings, and Zach Pascal in reserve.

The Titans hosted Campanaro on a visit last week and had reportedly been discussing a deal for weeks. Other clubs, including the incumbent Ravens, also expressed interest in Campanaro, but he never met with any team besides Tennessee.

The Titans are expected to meet with free agent wide receiver Michael Campanaro, according to Jeff Zrebiec of the Baltimore Sun (Twitter link).

Tennessee is searching for a new slot receiver, as 2017 slot man Eric Decker is currently a free agent. The Titans are also expected to host Jordan Matthews, and while he and Campanaro are very different receivers, they’ve both spent most of their time inside. At present, Tennessee’s wideout depth chart is topped by Rishard Matthews and 2017 first-rounder Corey Davis, with Taywan Taylor, Tajae Sharpe, Darius Jennings, and Zach Pascal in reserve.

The Titans have been speaking with Campanaro’s agent for several weeks, but they aren’t the only club with interest in the wideout, per Zrebiec (Twitter link). The Ravens are still open to re-signing Campanaro, while “a few” other unidentified teams have also checked in, according to the Baltimore Sun scribe.

Bengals tight end Tyler Eifert has missed 41 of 80 potential regular season games due to concussions, stingers, an elbow injury, a torn labrum, ankle surgery, disc repairs, and a knee issue. As he approaches free agency, he tells Jim Owczarski of the Cincinnati Enquirer that “everything is fixed.” Teams, of course, will be taking a thorough medical look at Eifert before extending him any offers. The 27-year-old Eifert is arguably the most talented free agent tight end available, but his injury history will put a ceiling on his market. PFR’s Zach Links recently ranked Eifert as the third-best available tight end, behind Trey Burton and Jimmy Graham.