Former Rams wide receiver Stedman Bailey is hoping to return to the NFL, as Grant Traylor of The Herald Dispatch writes. Many assumed that Bailey’s playing days were over after he survived two gunshots to the head in 2015, but he says his confidence never wavered. 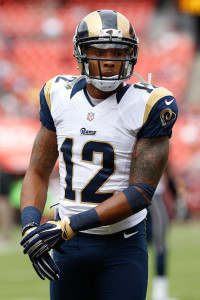 “I never had a doubt in my mind that I’d be able to play again,” Bailey said. “It kind of hurt with reports from doctors that I may not be able to walk or I may have trouble speaking again. Me, just being a positive person that I am, I just waved those reports off like, ‘OK, we’ll see.’ I set it in my mind to show them differently. “That incident happened in November 2015 and, five months later, I was on the field running routes and feeling good.”

Bailey has discussed a comeback in the past, but he is even more optimistic now that he has had a surgery to insert a plate into his skull. He believes that plate will allow him to absorb the impact of major hits since it is stronger than skull bone.

Bailey spent three seasons in the NFL with his best campaign coming in 2014. In that season, Bailey hauled in 30 catches for 435 yards and one touchdown.

Bailey, a former West Virginia star, took part in Marshall’s pro day on Wednesday and reportedly looked strong. There’s no word on whether he has picked up interest from NFL teams yet, however.

Darren Sproles may now be reconsidering retirement. The 13th-year passing-down back said in December that this season was likely going to be his last, but on Monday, the soon-to-be 34-year-old Eagles running back wasn’t quite ready to go that far. “We’re going to see,” Sproles said about retirement (via Zach Berman of Philly.com), adding “right after we make the playoffs, come back and ask me.” Sproles totaled the most carries of his career last year with 94, and he caught 52 passes. The 965 yards were the diminutive runner’s third-most in his career. Philadelphia drafted 2016 Division I-FBS rushing leader Donnel Pumphrey in the fourth round and signed LeGarrette Blount, but the team is likely to cut Ryan Mathews. Berman notes Sproles is still expected to play a big role for the Eagles this season, which is the last year of his contract.

The prospect of his NFL career currently exists as a sore conversation topic for Johnny Manziel. The 23-year-old former Browns quarterback, according to Kent Babb of the Washington Post, orders the subject changed when his playing career or the NFL comes up during discussions with his friends.

Many of Manziel’s friends do not know if he wants to play football again. One of Manziel’s close confidants told Babb in May that he did not expect the former Heisman Trophy-winning passer to attempt a comeback. Recent indications pointed to Manziel reconsidering a comeback in 2017. A substance abuse-induced suspension will shelve the free agent for four games in 2016, but the Texas A&M product seemed a long shot to land with a team even before the league handed down that ban.

Manziel, though, sent a statement to the Washington Post indicating he’s still interested in playing football despite his myriad legal troubles and various concerns emerging about his well-being.

“I’m actually doing well. I have good friends around me supporting what I do and I try to support them in what they want to do,” the statement read. “I’m not saying I’m never drinking again, but for now just mostly being healthy. I’ve got a killer gym in my house and I can spend time working out. I’m interested in doing a lot of different things in my life — including football — but, right now, I’m just exploring options and waiting to see what the future holds.”

The Chargers received the necessary 110,000+ votes to place their citizens’ initiative measure on the November ballot for the purposes of unlocking funds for a downtown stadium, Dan McSwain of the San Diego Union-Tribune reports.

“Most signature gathering efforts of this kind take six full months. We had just six weeks to complete our work,” Chargers chairman Dean Spanos said. “The fact that we were able to collect more than 110,000 signatures in that short period of time demonstrates tremendous support in our community for a new, combined stadium-convention center expansion downtown.”

The initiative calls for $650MM in funds from unspecified sources, which likely means money from the Chargers, fans, personal seat licenses and the NFL, per McSwain. But opponents of the initiative are formulating plans. Some are taking the stance of last year’s stadium task force that preferred to keep the Chargers at nearby Mission Valley as opposed to downtown.

Mayor Kevin Faulconer endorsed that site last year prior to the Chargers’ Carson bid being rejected. But he hasn’t come out in favor of either site recently and distanced himself from the activist group that’s attempting to prevent the Chargers-supported downtown stadium from coming to fruition.

The next step in this process is the San Diego registrar’s office determining if 66,447 of those aforementioned signatures are valid.

Here’s the latest from teams whose statuses in their current cities are a bit more entrenched.

It sounds as though the Seahawks are still open to re-signing backup quarterback Tarvaris Jackson, but until that happens, undrafted free agent Trevone Boykin is acting as Seattle’s No. 2 signal-caller, writes Bob Condotta of the Seattle Times. As Condotta notes, Jackson didn’t ink a new deal with the Seahawks until mid-June of last year, so it “wouldn’t break precedent” for him to re-join the club this late in the offseason this time around. A report at the end of April indicated that general manager John Schneider and head coach Pete Carroll were still in talks with Jackson, whom I listed as a honorable mention in PFR’s list of the best remaining offensive free agents.

Here’s more out of the NFC West…

With Alfred Morris having agreed to a deal with NFC East rival Dallas earlier this week, Washington is prepared to go forward with Matt Jones as its starting running back.

“That’s what we envision, yes,” said head coach Jay Gruden (link via Tarik El-Bashir of CSN Mid-Atlantic). “We like Matt. We think he’s a smart football player and he runs very, very hard. Now we just have to make sure the ball security is there [because] he can catch the ball out the backfield. He’s a very good solid football player that we have high hopes for.”

In his rookie year last season, Jones – a third-round pick from Florida – averaged just 3.4 yards per carry on 144 attempts (compared to Morris’ 3.7 and 202, respectively) and totaled as many fumbles (four) as touchdowns. Washington is expected to add a complement to Jones in either free agency or the draft, according to Gruden, who said the team is interested in re-signing the still-available Pierre Thomas.