The Texans have interviewed or requested interviews with several NFL staffers and ESPN analyst Louis Riddick thus far. This search could approach 20 candidates. However, one may hover above the rest. 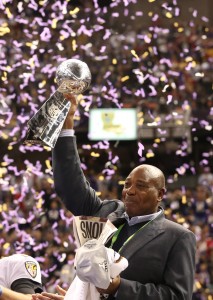 Houston is interested in former Baltimore GM Ozzie Newsome, with Jason La Canfora of CBS Sports reporting the ex-Ravens Super Bowl-winning exec is “at the top of the Texans’ wish list.” Because Newsome stepped down as Ravens GM after the 2018 season, giving Eric DeCosta personnel control, he would be free to interview with the Texans. Newsome currently serves as Ravens executive vice president.

However, Newsome has spent his entire executive career with the Ravens (and Browns 1.0 before that). He remains heavily involved in Ravens operations, though DeCosta oversees the franchise’s roster. Some close to the 64-year-old exec do not expect him to leave the Ravens for another NFL team, with La Canfora adding a role at his alma mater (Alabama) would be of interest before an NFL gig. But the Texans are genuinely interested in prying him from the Ravens, JLC adds.

This would be quite the upgrade from Bill O’Brien yet quite the fixer-upper project for someone as accomplished as Newsome, given the shape O’Brien left Houston’s roster in. The Hall of Fame tight end spent 23 seasons as Ravens GM, winning two Super Bowls and drafting Hall of Famers Jonathan Ogden, Ray Lewis and Ed Reed.

The second of the Ravens‘ two 2018 first-round picks has changed the course of their franchise, with Lamar Jackson becoming an MVP candidate barely a year after he made his first NFL start. Ravens brass took extensive measures to keep their Jackson interest secret. While John Harbaugh has said he discussed Jackson at length with his staff and scouts leading up to the 2018 draft, Eric DeCosta said he and previous Ravens GM Ozzie Newsome did not mention their interest in Jackson to the team’s scouts or coaching staff, according to Peter King of NBC Sports. Nor did the Ravens interview Jackson at the Combine, with Newsome and DeCosta wanting to keep what turned out to be an important secret. The Ravens, however, took a risk on losing Jackson by trading back twice in Round 1. Baltimore selected Hayden Hurst at No. 25 before trading back into the first round, via Philadelphia, for No. 32.

“We felt like there was a pretty good chance that Lamar might be there later in the first round, early part of the second round,” DeCosta said, via King. “We were willing, if we could, to trade back, trade back, accumulate capital and then possibly either try to trade back again or in a second round, make a play and get Lamar at that point. But, you know, it was a risk.”

“We were (nervous about losing Jackson). We were. But I think you’ve got to stay as clinical in the moment as you can, and really just go with all your best information and the plan.”

Ozzie Newsome had been the Ravens’ GM since the club’s inception in 1996, and he was the architect of two Super Bowl champions. Last January, Newsome announced that 2018 would be his last season as Baltimore’s GM, but it was reported that he would remain with the club in an unspecified role.

Now, that role is becoming a bit clearer. As Jamison Hensley of ESPN.com writes, Newsome’s voice still carries plenty of weight in the Ravens’ front office. He doesn’t have an official title, and new GM (and longtime Newsome lieutenant) Eric DeCosta has Newsome’s old office and the final say on roster decisions, but Newsome is plenty involved in the draft and free agency process.

Hensley observes that Newsome was instrumental in closing the deal with Earl Thomas last month — he has a good relationship with Thomas’ agent — and is doing a great deal of work on this year’s collegiate prospects.

Indeed, without the daily administrative duties of a GM, Newsome has watched more college tape than he has in the last several years. DeCosta said, “I think he’s really enjoying it. He’s grinding tape. He had a great time at the combine. He’s really been a valuable resource for me in terms of discussing players and what do you see. I think he’s really having fun with it.”

It remains unclear how involved Newsome will be on draft day, but DeCosta acknowledged that his mentor is likely to have a say on nearly every pick. And while head coach John Harbaugh reiterated that what DeCosta says goes, it can’t hurt to have someone as respected as accomplished as Newsome as a sounding board.

Newsome is under contract at least through 2020.

The Ravens’ defense will look considerably different in 2019. While C.J. Mosley and Eric Weddle helped anchor the past few units, Terrell Suggs was a cornerstone Raven for more than 15 years.

Suggs departed Baltimore for Arizona, where he grew up and played in college. But had Ozzie Newsome not followed through with the plan of stepping down as Ravens GM, Suggs said he would probably have re-signed with Baltimore. 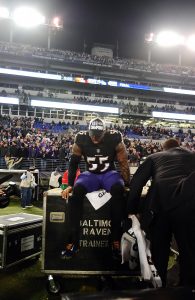 “Through and through I’m an Ozzie Newsome guy,” Suggs said during an appearance on Fox Sports’ Skip and Shannon: Undisputed (via NBC Sports Baltimore). “Once I knew Ozzie was going to step down as GM, you know, I kind of had to question my future in a Ravens uniform.”

Newsome’s exit strategy became official in February 2018. Longtime lieutenant Eric DeCosta is now running the Ravens’ front office. New starters will take their places on the 2019 Ravens’ defense. Mosley had started on the past five Baltimore defenses, Weddle the past three.

Suggs said he had considered this move for a while and added that the Ravens’ decisions on other veteran stalwarts this offseason affected his choice. Although news of Mosley’s Jets agreement did not emerge until after Suggs decided to leave, the Ravens opted to let the off-ball linebacker test the market.

“I actually decided before — I hadn’t slept in weeks. I was going to go back to Baltimore because it was the safe thing to do,” Suggs said during Undisputed of his initial instinct, before reconsidering and opting for Arizona (via BaltimoreBeatdown.com). “I loved and respected that organization so much that I had to remove myself out of the situation.”

The 36-year-old edge defender signed a one-year, $10MM deal with the Cardinals. He initially caught Newsome’s attention while playing at Arizona State in the early 2000s.

It’s a four-year deal with a fifth-year option for the Packers and Matt LaFleur, a source tells Tom Pelissero of NFL.com (on Twitter). LaFleur is a fast riser who is becoming a head coach for the very first time, but he appears to have solid job security in Green Bay. The financial terms of the deal are not yet known, but it would not be a surprise if he was on the lower end of the scale given his age and lack of experience at this level.

Here’s more from the North divisions: