The 2018 draft will bring one of the more unique quarterback pools in memory, with four passers likely going in the top 10 and possibly all coming off the board in the top five. Only with less than a month until the draft, the pecking order remains wildly uncertain. 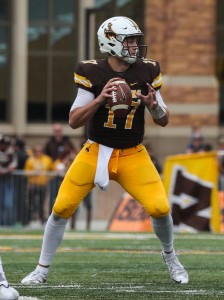 One team with a decision to make will be the Jets, and they’re divided about this quarterback class at the current juncture, Manish Mehta of the New York Daily News writes. They are not the only team going through the deliberation process, with the Browns — who are visiting with all four of the top prospects this week — finalizing their preference as well.

But Gang Green surrendered a bounty of picks to move up to the No. 3 spot, so some pressure is on Mike Maccagnan to get this pick right. Mehta notes that when the team made the move from No. 6 to No. 3, Baker Mayfield lagged behind the three other high-profile passers. Now, there’s been plenty of buzz about the Jets being ready to pull the trigger on the Oklahoma product.

Several Jets officials “love” Josh Allen‘s skill set, and the team has been connected to the Wyoming signal-caller since before its draft standing was established. The Jets were believed to have done the most work on Allen as of last season. Others in the organization, per Mehta, aren’t certain the Mountain West quarterback is right for New York.

Mayfield’s intangibles continue to impress many Jets officials, but his 6-foot frame and smaller hands are providing concerns, Mehta writes, adding that Mayfield’s footwork has even drawn scrutiny for some. Others point to his dominance in college — 70.8 completion percentage from 2016-17 — as reasons the footwork won’t be an issue. A consensus of sorts, though, points to the Jets preferring Sam Darnold over Mayfield. Although, Darnold is not expected to make it past both the Browns and Giants. Execs expect the Giants, who are not certain to take a quarterback, to pull the trigger on Darnold if the Browns go with Allen.

Additionally, Mehta notes the Patriots are fans of Mayfield. And after their Brandin Cooks trade, they have a major additional resource — the Rams’ No. 23 overall pick — to attempt a possible trade-up to acquire a quarterback. Said passer, investment-wise, would be the franchise’s most significant effort to appoint a Tom Brady successor. Mehta adds the Bills remain in hot pursuit of a trade into the franchise-quarterback sector of the draft. And Buffalo’s stockpile of picks may be enough to outflank the Patriots, whom Mehta does not expect to be able to strike a deal with the Giants for the No. 2 selection.