The Steelers have undergone a meticulous search to find outgoing general manager Kevin Colbert‘s replacement. The list of preferred candidates has reportedly been finalized.

Pittsburgh has concluded their interviews for the position, per Gerry Dulac of the Pittsburgh Post-Gazette. The team initially met with 16 executives representing a noteworthy cross-section of internal and external personnel. That list was then narrowed down to six candidates, each of whom received a second look.

Included among the finalists are Brandon Hunt and Omar Khan. The former has worked in Pittsburgh on two separate occasions, the most recent stint beginning in 2010; he is currently the team’s pro scouting director. Hunt has also received interest for a significant front-office role in Philadelphia. The latter, meanwhile, has been with the Steelers since 2001, working his way up to the role of vice president of football and business administration and generating interest on a number of occasions from other teams during previous GM hiring cycles.

The other second interviewees come from outside the organization: Ryan Cowden, John Spytek and Andy Weidl, who work in the player personnel departments for the Titans, Buccaneers and Eagles, respectively. The other external name to be given notable consideration is Doug Whaley, who began his front office career with the Steelers before a stint as the Bills’ GM and, most recently, a position with the re-booted XFL.

Dulac notes that it remains to be seen if the six-name list is reduced even further before a hire is made. He adds that there is still “no specific timeframe” for when the new GM will be named.

Here is the complete breakdown of the Steelers’ search:

With the draft over, longtime Steelers general manager Kevin Colbert’s tenure in that role has officially come to an end. As a result, the team’s search for his replacement is now front and center. NFL Network’s Mike Garafolo reports (on Twitter) that second interviews will be conducted with Ryan Cowden and John Spytek, among others.

Cowden has been with the Titans since 2016. After 16 years in Carolina, Tennessee hired him to work in the player personnel department, and he has played a key role in the team’s recent success. As a result, he has generated interest in recent GM searches, including an interview with the Giants earlier this year for their opening and his first meeting with Pittsburgh one month later.

Spytek has followed an almost identical recent career path to Cowden. He too was hired in 2016 (after spending time as a scout with the Browns and Broncos) and has served as first director, then vice president, of player personnel for the Buccaneers. Likewise, his contributions to the team’s success has caught the attention of other clubs. He interviewed with the Vikings and Raiders before doing so with the Steelers this offseason.

As Garafolo notes, the list of candidates to be interviewed a second time will grow longer than these two. For now, though, here is an updated look at Pittsburgh’s search:

The search for a new general manager in Pittsburgh has led the team to Louis Riddick. The ESPN analyst is scheduled for an interview (Twitter link via Ian Rapoport of NFL Network).

The 52-year-old began his front office career as a scout in Washington in 2001. He spent seven years there, then an additional six with the Eagles. The final four seasons of that time, in which he was Philadelphia’s director of pro personnel, represent his most senior job title. He has been out of the NFL since 2013, most recently working as an analyst on Monday Night Football. Last offseason, though, he received GM interest from the Lions, Texans and Jaguars.

A Pennsylvania native, Riddick played college football at Pitt, so he would certainly represent a hometown candidate to replace Kevin Colbert. He will be the fourth external candidate to interview for the role, though there are no details on when the sit-down will take place.

Here is where the Steelers’ GM search stands so far:

Although Kevin Colbert‘s lengthy Steelers GM tenure will not conclude until after the draft, the team is beginning to meet with potential replacements. Three external candidates interviewed for the job this week.

All three came up in at least one other team’s GM search this year. Dodds met with two other teams — the Bears and Raiders — ahead of his Steelers interview, which also likely included Colbert and Mike Tomlin, who are also in Mobile. Cowden met with the Giants last month, while the Bears targeted Wooden before hiring Ryan Poles. Steelers vice president of football and business administration Omar Khan is also a candidate to succeed Colbert.

With the Colts since 2017, Dodds withdrew from both the Bears’ 2022 GM search and the Panthers’ search process last year. The former Seahawks exec also pulled out of the Browns’ GM search in 2020. Cowden is in his sixth year with the Titans, coming to Tennessee after 16 years with the Panthers. Wooden has been with the Chargers since Tom Telesco‘s GM tenure began in 2013.

6:38pm: We learned earlier today that Giants GM Dave Gettleman was calling it a career, opening a vacancy atop the organization’s front office. Well, the organization has already started requesting interviews with potential replacements. ESPN’s Adam Schefter reports (via Twitter) that the Giants requested an interview with Bills assistant GM Joe Schoen. 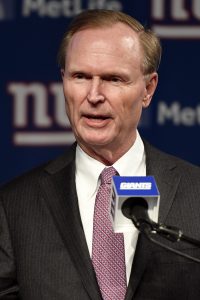 Schoen is set to interview Wednesday, per SNY’s Ralph Vacchiano (on Twitter). Schoen has been with the Bills organization since 2017, and he’s played a major role in the organization’s recent rise in the AFC. Prior to his stint in Buffalo, Schoen spent almost a decade in Miami (when he was endorsed by Bill Parcells), evolving from a national scout into director of player personnel. The executive also had a stint with the Panthers, working his way up from an intern in the ticket office.

Poles was mentioned as a candidate for the Panthers GM job last offseason. The executive has spent much of his career with the Chiefs, working his way up from director of college scouting to executive director of player personnel, where he works alongside GM Brett Veach and assistant GM Mike Borgonzi.

Ossenfort was also a candidate for the Panthers GM gig. The executive previously worked in the Patriots front office before moving on to Tennessee. Cowden has been with the Titans for six years, and that followed an almost two-decade stint with the Panthers organization.

Meanwhile, while many assumed that Giants assistant GM Kevin Abrams would be an option for the top gig, Paul Schwartz of the New York Post tweets that the executive “is not considered to be a candidate.” However, Abrams is respected within the organization and could stick around under a new GM.

With Washington having been eliminated, the franchise has moved to its GM interview process. The team has requested a meeting with 49ers VP of player personnel Martin Mayhew, Nicki Jhabvala of the Washington Post tweets.

Mayhew played with Washington in the 1980s and ’90s and rose to a GM position in 2008, taking over the Lions after Matt Millen‘s dismissal. Mayhew held that job until 2015, when the Lions fired him. Mayhew has been with the 49ers since 2017 but was on the radar for the Washington GM job.

Washington has gone without a GM since hiring Ron Rivera a little more than a year ago. But Mayhew joined the likes of ex-Panthers GM Marty Hurney and ex-Texans GM Rick Smith as WFT candidates with GM experience. Smith was on Washington’s radar last year.

Titans VP of player personnel Ryan Cowden also received an interview summons from Washington, according to J.P. Finlay of NBC Sports Washington. Cowden also resided on Washington’s GM radar in a search that is now taking shape. Cowden has been with the Titans since 2016. While Cowden has spent the past several years in Tennessee, he worked with Rivera in Carolina as the Panthers’ assistant college scouting director. Both Cowden and Mayhew broke into the personnel ranks around the same time; Cowden became an NFL scout in 2000 and Mayhew joined the Lions as an exec in 2001.

Mayhew was with the Lions throughout Millen’s disastrous tenure, but after taking the GM reins amid the franchise’s 0-16 season, the ex-NFL cornerback helped elevate them back to respectability. Mayhew hired Jim Schwartz and drafted Matthew Stafford in 2009, and Detroit made the playoffs in 2011 and 2014 — coming close to a first-round win in Dallas during the ’14 season. The Lions were also in the 2016 playoffs behind Mayhew hire Jim Caldwell, though the since-fired Bob Quinn was running the team by that point.

Sam Hinkie developed an interesting reputation in the NBA, taking a unique path toward rebuilding the Philadelphia 76ers during his run as their GM. He set them on their current course via historic tanking over a years-long endeavor dubbed “The Process” — one that led to the team making several lottery picks, two of those becoming Joel Embiid and Ben Simmons. Although Hinkie stepped down from his post in 2016, his work looks much better after those two prospects became stars and spearheaded Philly into the playoffs this season. And an NFL team took the time to pick his brain this week. Nicki Jhabvala of The Athletic reports (subscription required) the Broncos brought in the 40-year-old executive for an analytics powwow. Hinkie spoke to the Broncos’ analytics department, as well as members of their scouting branch, football administration and conditioning staffs this week, per Jhabvala, on how to best use the data teams are now collecting.

Here’s the latest from some front offices around the league.