In anticipation of today’s deadline for college underclassmen to declare their NFL intentions, one of this year’s top quarterbacks announced that he is turning pro. Ohio State’s C.J. Stroud announced (on Twitter) that he is forgoing his senior year and entering the 2023 draft.

The decision comes as little surprise given his production with the Buckeyes, though it was not taken lightly. Mike Garafolo of NFL Network tweets that Stroud “strongly considered” remaining at Ohio State for the 2023 campaign. Instead, the Heisman finalist will turn his attention to the upcoming draft, where he will be a highly sought-after prospect. 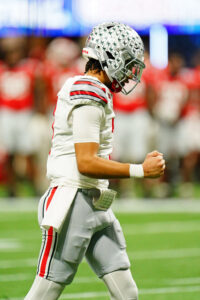 Stroud took over for Justin Fields under center for the Buckeyes in 2021, and immediately showcased his potential. The 6-3, 215-pound passer racked up 4,435 passing yards and 44 touchdowns as a sophomore, allowing the team’s offense to continue its efficiency under head coach Ryan Day. His performance earned Stroud Big Ten Offensive Player of the Year honors, and he finished fourth in Heisman voting that year.

Entering the 2022 campaign, Stroud was set to compete with Alabama’s Bryce Young for the title of top QB prospect in the upcoming class. The former put together another strong season, though his yardage, touchdowns and completion percentage totals each dipped compared to 2021. Stroud helped lead the Buckeyes to the CFP semifinals, where they nearly pulled off a major upset against the eventual-champion Georgia Bulldogs. He was once again named the conference’s top offensive player, and finished third in Heisman voting to solidify his status as one of the top prospects at any position this spring.

Young is generally regarded as the top passer, but a number of teams in need of a new quarterback will have the opportunity to draft Stroud inside the top 10. Much will depend on the Bears’ plans with the No. 1 pick, and the jockeying which will take place to trade for it should they decide to move down the board. Whichever teams are unable to land Young will be acutely aware of Stroud’s pre-draft process, as he and Kentucky’s Will Levis represent the other first-round locks at the position.

Stroud’s decision comes not long after his teammate, left tackle Paris Johnson Jr., declared for the draft (Twitter link). The 6-6, 315-pounder enjoyed a stellar campaign this season, his first as a blindside blocker. Johnson was charged with only two sacks allowed en route to a career-high PFF grade of 83. A consensus All-American, he is also considered a surefire first-rounder and is in contention alongside Northwestern’s Peter Skoronski to be the first tackle off the board.

With Stroud, Johnson and wideout Jaxon Smith-Njigba all having turned pro, the Buckeyes figure to have at least three players hear their names called on Day 1 of the draft. The former two in particular are likely to feature heavily in the evaluation process leading up to the spring. 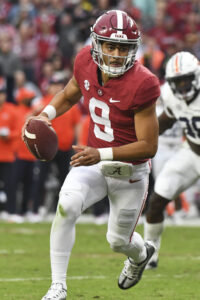