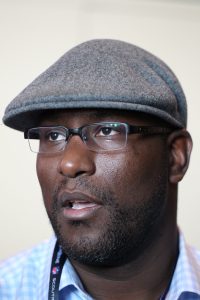 This is the first known GM interview Farmer has received since the Browns fired him after the 2015 season. He spent two years running Cleveland’s front office, and like most modern Browns proceedings, it was a messy tenure. But the Fritz Pollard Alliance named Farmer one of its GM candidates entering the 2018 offseason.

Farmer, 44, spent one season as Cleveland’s assistant GM before Jimmy Haslam promoted him — after February 2014 ousters of the previous regime. The 2014 draft, which featured first-round picks of Justin Gilbert and Johnny Manziel (neither having played since the 2016 season), preceded a rocky two years. Farmer was not believed to be on board with either pick, with Haslam and Mike Pettine interceding. In 2015, the NFL suspended Farmer four games for texting coaches during games in 2014. This makes for an interesting start to Houston’s latest round of GM interviews.

A former NFL linebacker, Farmer spent seven seasons as Chiefs director of pro personnel before moving to Cleveland. He also worked as a Rams consultant since his Browns dismissal. While Farmer is the first known candidate, and one who was not connected to the Texans’ 2018 GM search, it is likely the franchise will soon involve executives who have been candidates for GM jobs in recent years in its interview process.

Steelers kicker Shaun Suisham is supposed to be in a roster battle with Chris Boswell, but there might not be much of a fight if Suisham doesn’t get healthy soon, as Mark Kaboly of the Pittsburgh Tribune-Review writes. Suisham says he has yet to recover from a torn ACL that he suffered last year and he has not attempted a kick since then. Now, Suisham isn’t sure if he will be ready for training camp at the end of July.

“Any sort of a battle is not an issue with me right now because I am not healthy,” Suisham said. “I will continue to work to get there, but I don’t know when that will be. I don’t have a time frame. Hopefully, it is for training camp.”

Suisham signed a four-year, $12.5MM extension in 2014, making him one of the top 10 highest-paid kickers in the NFL. The Steelers would save $2.4MM by releasing him. Boswell, meanwhile, makes the NFL minimum $525K.

The Browns have promoted executive vice president/general counsel Sashi Brown to executive VP of football operations, tweets ESPN’s Adam Caplan. Brown will join owner Jimmy Haslam, Dee Haslam (Jimmy’s wife), and consultant Jed Hughes in finding the club’s next head coach, per Nate Ulrich of the Akron Beacon Journal (on Twitter) and Mary Kay Cabot of Cleveland.com (Twitter link). The coach will then help them hire a general manager (Twitter link via Ulrich). The new GM will report to Brown and the coach will report to Haslam, according to Ulrich (via Twitter). The GM’s duties will center on talent acquisition and scouting, while Brown will handle the 53-man roster and salary cap (via Ulrich on Twitter).

More on the Browns as they embark on another new era:

6:14pm: The Browns have made the respective releases of Pettine and Farmer official. Haslam has issued a statement promising a “methodical” search to replace both (Twitter link via Tom Pelissero of USA Today). They’ll get to work early in trying to fill the void of Pettine, according to ESPN’s Dianna Marie Russini, who tweets Cleveland will interview Bears offensive coordinator Adam Gase.

4:53pm: Browns head coach Mike Pettine will meet with owner Jimmy Haslam at 7pm Eastern Time, at which point he is expected to be fired, according to Adam Schefter of ESPN (Twitter link). General manager Ray Farmer met with ownership prior to today’s game, and he is also being fired, per Ian Rapoport of NFL.com (Twitter link).

It comes as no surprise that Pettine’s tenure in Cleveland is over, as reports over the weekend indicated that his job was in severe jeopardy. The 49-year-old ends his two-year Browns career with a 10-21 record, and the fact that the club backslid from a 7-9 mark in 2014 to a 3-13 record this 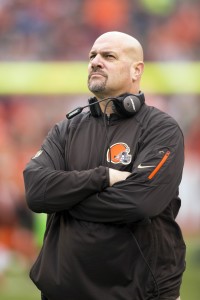 season can’t have helped his case. Perhaps most striking was the club’s defensive performance — Pettine, a former defensive coordinator with the Jets and Bills, oversaw a unit that finished 31st in defensive DVOA.

For the Browns, Pettine’s dismissal only adds to the level of dysfunction and frustration that the club has experienced since the organization returned to Cleveland in 1999. Pettine is the fourth consecutive Browns coach to fail to last more than two seasons, and no Cleveland head coach has lasted more than four years since that ’99 return. The team will now be hiring its fifth head coach since the 2009 season.

Farmer, 41, also leaves Cleveland after two seasons at the helm as general manager (he spent the 2013 season as assistant GM). It’s hard to paint a positive picture of Farmer’s time with the Browns, though some draft picks (Joel Bitonio) and free agent signings (Andrew Hawkins, Josh McCown) did work out. But for the most part, Farmer failed in both areas of player procurement, handing $9MM in guaranteed money to receiver Dwayne Bowe (who has five receptions on the year) and using first-round picks on Johnny Manziel and Justin Gilbert.

Cleveland’s record of general manger hires is nearly as rocky as its success with head coaches. The Browns will now be hiring their sixth GM since the 2005 season, and have to hope that their next candidate has a longer tenure than Farmer. Ownership has given very little rope in terms of GMs, as George Kokinis and Michael Lombardi each lasted only one season, while Farmer last just two.

SATURDAY, 8:22pm: The Browns are expected to fire both Pettine and Farmer, perhaps as early as Sunday night, according to Cabot. Haslam has already begun the process of finding replacements and could start scheduling interviews tomorrow night.

SATURDAY, 8:45am: According to Ian Rapoport of NFL.com, Pettine explicitly asked Haslam whether he’d be retained for next season. The owner reportedly refused to answer.

“Pettine actually asked him, ‘Have you made a decision about my future?’ And Haslam would not answer, and that essentially ended that meeting,” Rapoport said on NFL Network (via Michael David Smith of ProFootballTalk.com).

FRIDAY, 8:18pm: Browns staffers came out of a Friday meeting with head coach Mike Pettine with the sense that he’ll be fired in the coming days, sources told Mary Kay Cabot of Cleveland.com. Sources also indicated owner Jimmy Haslam informed Pettine that a decision won’t be made until Monday, one day after the 3-12 Browns end their season against AFC North rival Pittsburgh.

Further, a move in the personnel department Monday could precede a possible Pettine firing. That would put second-year general manager Ray Farmer in jeopardy, as Cabot reports. During their run as GM and coach, Farmer and Pettine have combined to lead the Browns to a 10-21 mark. Haslam preached stability regarding both jobs over the summer, but that was before a disastrous 2015-16 campaign that will likely force him to make major changes.

Regardless of whether Farmer or someone else is the Browns’ GM, there will be obstacles standing in the way of finding a quality Pettine replacement. Cabot points to a lack of past stability with Browns coaches, plenty of other openings around the NFL, and the absence of a franchise quarterback as issues Cleveland will have to overcome. Since Haslam took over the team in 2012, he has already fired two head coaches. Pettine would be the third, and Haslam’s perceived trigger-happy nature in firing coaches might scare off candidates this year.

The latest on a couple of AFC teams that are on the cusp of major overhauls: