United States Secretary of Defense Ashton Carter has cleared Ravens rookie and Navy product Keenan Reynolds to play in the NFL in 2016, the Ravens announced on Friday. Reynolds, who was listed as a return specialist in addition to wide receiver, issued the following statement: 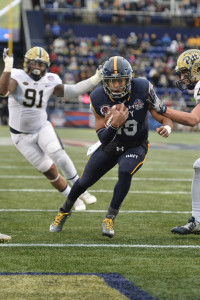 “It is a blessing to hear the news from Defense Secretary Carter today,” Reynolds said. “I am truly excited to proudly serve my country while having the ability fulfill my dream of playing for the best organization in the NFL. I would like to thank the Navy for allowing me to represent them while taking advantage of this unique opportunity. I would also like to thank Mr. Bisciotti and the Ravens organization for believing in me and giving me this chance.”

Reynolds is obligated to serve in the military as per his agreement with the United States Naval Academy, but he has received special clearance to defer his service. The Navy likely sees tremendous upside in the good PR that will come from Reynolds playing in the NFL.

Leading up to the draft, the Patriots were heavily connected to Reynolds. The Ravens reportedly had what they considered “reliable information” that the Patriots would try to draft Reynolds in the sixth round. With that in mind, Baltimore beat New England to the punch by nabbing Reynolds with the 182nd overall selection. New England has shown an affinity for Navy alums in the past and Reynolds’ ability to be used as a wide receiver, kick returner, or even a quarterback appealed to coach Bill Belichick.

2 comments on “Navy Permits Keenan Reynolds To Play In 2016”