The Chiefs have promoted Mike Borgonzi to assistant GM, per a team press release. The club also elevated Brandt Tilis to Vice President of Football Operations and Ryan Poles to Executive Director of Player Personnel.

All three executives have been in the mix for GM jobs elsewhere. But, with Brett Veach installed as the Chiefs’ GM, that job won’t be available anytime soon.

The Panthers met with all three executives in this last cycle before ultimately landing on ex-Seahawks VP Scott Fitterer. It’s safe to say that they’ll garner consideration again in the 2022 cycle, but the Chiefs might be able to hang on to them for a while longer with these pay/title bumps.

Tilis has been a key cog in Chiefs contract matters since starting with them in 2010. Among his CV highlights: squeezing in extensions for Patrick Mahomes, Chris Jones, and Travis Kelce to keep one of the NFL’s strongest teams in tact. Poles, 36 in September, has served as the assistant player personnel director since May 2018.

Chiefs quarterback Alex Smith became $2MM richer when he showed up to training camp Thursday, making his reporting bonus the largest in the NFL, per Field Yates of ESPN (on Twitter).

With Smith and first-round pick Patrick Mahomes in the fold, the Chiefs aren’t in the market for a signal-caller, but there would be “no hesitation” to sign polarizing free agent Colin Kaepernick if they were, owner Clark Hunt told NBC Sports Radio in San Francisco on Wednesday (via Scott Gleason of USA Today).

While Kaepernick’s political activism has made it difficult for him to find work since he opted out of his contract with the 49ers in March, that wouldn’t have deterred the Chiefs from pursuing him. Clark noted that “there are certain circumstances where guys get in trouble off the field, and that is something as an organization and as a family we care about,” but Kaepernick isn’t someone who has been a problem away from the gridiron.

Notably, Kaepernick was teammates with Smith when the two were 49ers from 2011-12. Kaepernick took the No. 1 job from Smith during that stretch, which led San Francisco to trade him to Kansas City, but there’s no chance of the two appearing on the same depth chart with the Chiefs.

More on KC and a few other AFC franchises: 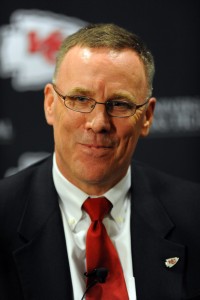 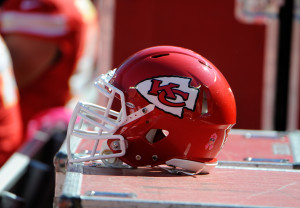