We can add another name to the list of Raiders GM candidates. According to Mike Jones of USA Today (on Twitter), the Raiders will interview director of pro personnel Dwayne Joseph for their general manager opening.

Joseph joined the Raiders back in 2019 as their director of pro scouting. Following his first two years on the job, Joseph was named as a top minority candidate for a GM job. However, the executive didn’t end up getting any interviews during last year’s cycle.

The 49-year-old has been in front offices since 1998. He’s had multiple stints with the Bears organization, including most recently as assistant director of pro personnel between 2013 and 2015. Joseph has also spent time with the Dolphins and Eagles.

Joseph is now the fifth candidate to emerge for the Raiders GM job, joining a list that already includes:

9:53am: Armstrong has taken to Twitter to deny having contact with the Bears about this position: “I have the utmost respect for the Chicago Bears organization, the McCaskey family and Ted Phillips,” he said. “However, any assertion that I have engaged in conversations with them about joining the club in any capacity is simply not true.”

9:12am: Major changes could be afoot in the Windy City. Bears head coach Matt Nagy is almost certainly going to be axed at season’s end, GM Ryan Pace‘s hold on his position seems tenuous as well, and as Jason La Canfora of CBS Sports writes, Chicago is mulling an overhaul of its entire power structure. 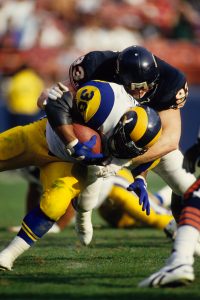 La Canfora says that team ownership has discussed a top management position with Trace Armstrong, a longtime NFL player and a prolific coaching agent who also represents broadcasting talent and current NFL execs. Such a position would see Armstrong at the top of the football operations department, with the head coach and GM reporting directly to him.

One of Armstrong’s top clients is Ohio State head coach Ryan Day, who has led the Buckeyes to a 33-4 record since taking charge of the program in 2019. Day, 42, has served as the QB coach for the Eagles and 49ers and has also been connected to the Titans’ OC job and the Jaguars’ head coaching post in recent years. Armstrong believes that Day can be a winning head coach in the NFL, and it would be sorely tempting to reunite him with Justin Fields, his former OSU pupil.

While it would of course be difficult to leave his agent practice, Armstrong is serious about this position, and he is held in high esteem by the McCaskey family and team president Ted Phillips. The Bears selected Armstrong in the first round of the 1989 draft, and he spent the first six years of his pro career in Chicago. He racked up 42 sacks in that time, and he ended his career with 106 sacks, including a 2000 Pro Bowl campaign with the Dolphins that saw him pile up 16.5 QB takedowns. From 1996 through the end of his playing career in 2003, Armstrong worked as the NFLPA president.

Another prominent client of Armstrong’s is Raiders director of pro scouting Dwayne Joseph, who may join the Bears’ front office if this scenario materializes. Joseph, who served as a Chicago staffer from 1998-03 and again from 2012-15, was recently named as a top minority candidate for a GM job.

This is all still in the preliminary stages, of course, but a shake-up like this one might not be the worst idea for a franchise that has qualified for the playoffs just three times since its Super Bowl XLI loss to the Colts at the end of the 2006 season and that has been stuck in neutral for awhile.

Many 49ers are not healthy as the team goes through its OTAs. In addition to the likes of Jerick McKinnon, Weston Richburg, Jason Verrett and Kwon Alexander, the team lost one of its running backs because of a weightlifting injury. The 49ers will not have Matt Breida available until at least training camp. The running back, who battled maladies last season before ending the year on IR, suffered a partially torn pectoral muscle while lifting recently, Matt Maiocco of NBC Sports Bay Area notes. San Francisco is already without McKinnon and backup Raheem Mostert, who is battling for a roster spot now that the team employs Tevin Coleman. While torn pectorals of any kind are obviously a concern, Kyle Shanahan said Breida will not require surgery. But the 49ers’ optimal backfield still has a ways to go before coming together.

Here is the latest from the NFL’s Bay Area teams, in their final offseason sharing a region.

When Kentucky linebacker Josh Allen was still on the board at No. 4 in the NFL Draft, the Raiders seemed like a solid landing spot after the team finished with just 13 sacks in 2018. Oakland, however, never viewed the pass rusher in play, The Athletic’s Vic Tafur writes.

“I heard that the Raiders weren’t that impressed. I reported pretty early on he wasn’t in play for them at No. 4. I would never question a player’s toughness but there were concerns that he got pushed around a little on some plays at Kentucky and he may not have had enough dog in him for Gruden and Guenther’s liking.”

Oakland, of course, decided to go another way with the pick, surprising many when they tabbed Clemson’s defensive end Clelin Ferrell. Allen, the reigning Bednarik and Nagurski Award winner projected by many to go as high as No. 3, fell a little further and wound up with Jacksonville at No. 7.

While Allen joins a loaded defense in the Jaguars, Ferrell will be looking to fill the void left by All-Pro defensive end Khalil Mack, who recorded just a half-sack fewer than the entire Oakland squad in 2018.

The Bills were the team North Dakota State quarterbacks coach Randy Hedberg recalled being the most enamored with Carson Wentz, staging several visits to the Fargo, N.D.-based Division I-FCS school to gauge the first-round prospect, Tyler Dunne of the Buffalo News reports.

Bills representatives attended several Bison practices and were a constant in North Dakota State’s football facility, Hedberg told Dunne, to look at the rare non-FBS first-round quarterback prospect. Dunne notes, however, that at this rate the fast-rising Wentz won’t be available when the Bills select at No. 19, as the 6’5″ signal-caller has impressed this week in Senior Bowl workouts.

Buffalo still has Tyrod Taylor and EJ Manuel under contract for 2016.

Here is the latest on the most unlikely top-tier quarterback prospect in a while and other news from around the Eastern divisions.

A second-round pick just four years ago, Da’Quan Bowers hasn’t generated much interest on the free agent market this offseason — or at least not much that has been reported. However, with veteran free agents no longer tied to draft pick compensation after May 12, the former Buccaneers defensive end may soon find a home.

According to Jayson Braddock of ESPN 97.5 Houston (Twitter link), Bowers is paying a visit to New Orleans to meet with the Saints this week. Previously, Braddock reported (via Twitter) that the 25-year-old had narrowed his options down to the Lions and Dolphins, so it’s not clear whether those teams remain in the mix, or if they’ve moved on.

As we wait for an update on Bowers, let’s round up a few more items from around the NFL….