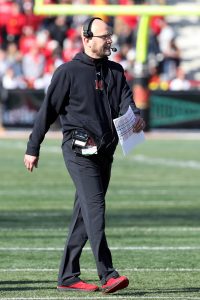 It was not hard to see the candidate atop the Panthers’ list to succeed Ron Rivera. The team gave Matt Rhule a seven-year, $62MM deal to lead a rebuild.

But the Panthers identified another college coach they wanted to meet with during their hiring process this offseason. Clemson offensive coordinator Tony Elliott landed on Carolina’s radar, with Tom Pelissero of NFL.com noting the Panthers wanted to interview the longtime Dabo Swinney assistant for their HC position.

Elliott declined the interview, but this marks the former Clemson wide receiver’s first major connection to an NFL jump. The Panthers did extensive research on the 40-year-old assistant, per Pelissero, and that intel may be relevant at some point down the road. Joe Brady has impressed in his first season as Carolina’s OC and may well land an interview with a team in 2021, even though he is 31 and has only been a coordinator for half a season. Carolina’s staff is filled with recent college coaches, with Rhule naming Brady and longtime lieutenant Phil Snow as offensive and defensive coordinators, respectively, this year.

Elliott has been with Clemson since the 2011 season, rising from the Tigers’ running backs coach to a co-offensive coordinator post during Deshaun Watson‘s ascent to the team’s solo OC this season. Considering Clemson’s status as one of college football’s powers — a relatively new status for the ACC program — Elliott is bound to receive more interest from NFL teams to move up to a pro coordinator or HC post.