The Eagles will have several new faces in their personnel department before the 2022 season begins. Another notable name is out of the picture post-draft.

Ten-year Philadelphia executive Tom Donahoe will part ways with the team, according to the Philadelphia Inquirer’s Jeff McLane, who notes the sides decided not to work out another contract. A post-draft meeting led to this conclusion, and Donahoe will follow several execs out the door in Philly this offseason.

A Pittsburgh native, Donahoe led the Steelers front office for most of the 1990s, working alongside Bill Cowher to help the team become a perennial contender again. After his 2000 ouster, Donahoe took over as the Bills’ general manager in 2001. That tenure did not go as well, and the Bills moved on after the 2005 season. Donahoe, however, established a longtime partnership with the Eagles, one that began in 2012. It is unclear if the 75-year-old decision-maker plans to retire.

Although the Donahoe-Howie Roseman fist bump-failure moment went viral during Day 2 of the 2021 draft, the veteran exec stayed on for another year and had been with the Eagles through four head-coaching regimes. Donahoe oversaw the team’s scouting department for a stretch in 2016, when Roseman had regained power after Chip Kelly‘s short but memorable stretch at the helm.

Donahoe’s departure is the latest of several exits. Scouting director Casey Weidl, brother of Eagles player personnel VP Andy Weidl, is out. The Eagles also moved on from southwest area scout Shawn Heinlen, according to InsidetheBirds.com’s Geoff Mosher and Adam Caplan (on Twitter), and exec T.J. McCreight, per McLane. These moves follow VP of football operations Catherine Raiche‘s exit for Cleveland, director of player personnel Brandon Brown‘s move to the Giants and senior scout Ian Cunningham‘s Bears hire. Both Brown and Cunningham are now in assistant GM roles, with Raiche’s Browns job believed to be on that level as well. Roseman will have a few hires to make in the coming weeks.

Catherine Raiche‘s NFL rise is set to continue, and the next step will take place in Cleveland. The Browns are set to hire the Eagles executive, according to USA Today’s Jori Epstein (on Twitter).

Previously rising to the role of Eagles vice president of football operations, Raiche is set to work in an assistant GM-type capacity with the Browns, per Epstein. The Browns lost Andrew Berry‘s previous top lieutenant, Kwesi Adofo-Mensah, when he became the Vikings’ GM. Raiche has only been in the NFL since 2019 but experience in an assistant GM role, serving in that capacity with the CFL’s Montreal Alouettes in 2017.

Raiche, 33, interviewed for the Minnesota job Adofo-Mensah landed. The Eagles promoted the young exec to the VP of football ops role in May 2021, making her the highest-ranking female exec at that point. With the Browns, she will still hold that distinction. Raiche worked with Berry in 2019, when the current Browns GM worked as the Eagles’ VP of football ops. After rising to the role Berry vacated, Raiche is set to play a significant role in Cleveland.

The Eagles have lost a few key personnel staffers this offseason. Both Ian Cunningham and director of player personnel Brandon Brown left for jobs with the Bears and Giants, respectively, during the winter. The Eagles also fired college scouting director Casey Weidl earlier Wednesday.

4:04pm: More names are emerging on the Vikings’ fast-growing candidate list. The Vikings want to interview Titans director of player personnel Monti Ossenfort, Ben Goessling of the Minneapolis Star Tribune tweets. Ossenfort’s name has been tossed around for GM vacancies for a bit now, dating back to his time with the Patriots.

With the Titans since 2020, Ossenfort advanced to the second round of Panthers GM interviews last year. He also has a history with the Vikings. The Minnesota-Morris alum worked as a training camp intern with the Vikes in 2001, Goessling notes.

8:59am: It was reported overnight that another three names have been added to the Vikings’ list of general manager candidates. Two of them are from the Eagles, including one who represents a piece of NFL history.

According to ESPN’s Adam Schefter, the Vikings have put in a request to interview Eagles VP of football operations Catherine Raiche (Twitter link). That news is ground-breaking, as it is believed to be the first time a woman has been requested to be interviewed for a GM position. Schefter and others have noted that Susan Tose Spencer was the first female GM in NFL history, holding that title from 1983-85, but she was promoted internally to that role.

This doesn’t appear to be the first time that someone has shown interest in Raiche. Sports Illustrated’s Albert Breer notes in his annual GM preview that current Browns GM Andrew Berry tried to bring the 32-year-old with him when he left that same VP of football operations role to come to Cleveland. He adds that one of her former colleagues has stated “she will be the first female GM [hire]”. NFL Network’s Mike Garafolo notes that Raiche was promoted to her current position last year, following successful stints in the CFL and XFL which have helped her climb the executive ladder very quickly.

Garafolo also tweets that Eagles director of player personnel Brandon Brown has had an interview requested as well. Brown started full-time in an NFL front office with the Colts in 2015, then came to Philadelphia in 2017. He has spent the past five seasons with the Eagles, and was promoted to his current role – which includes work on both the pro and college scouting levels – in 2021.

Finally, Schefter tweets that the Vikings are requesting to interview Chiefs director of player personnel Ryan Poles. He has already been named as a candidate for the Giants’ open GM position, and was also linked to the Panthers for the same job last season. Poles has been with Kansas City since 2009, where he began as a scouting assistant, and has worked his way up to being a key member of the Chiefs’ font office.

These additions brings the total number of interview requests for the Vikings’ GM position to eight.

The Eagles announced a host of hires and changes to their personnel department on Thursday. Among the newcomers: Former Jaguars GM Dave Caldwell, who is listed as a “personnel executive.” The Eagles also promoted Catherine Raiche to VP of Football Operations. With the move, the 32-year-old is now the highest-ranking female in NFL personnel history. 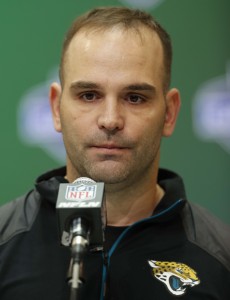 Caldwell got canned by the Jags in November following a loss that knocked them down to 1-10. The decision wasn’t a shocker, but the timing was a surprise — most figured the Jaguars would ride out the lost season and start from scratch in January. Caldwell was in the midst of his eighth season with the team, which was largely bumpy. After his hire of Gus Bradley and drafting of Blake Bortles didn’t work out, he was essentially demoted when the team hired Tom Coughlin to run football ops. Then, Coughlin was kicked out. But, when Caldwell took the helm again, the team was without many of its stars, including Jalen Ramsey.

Before joining the Birds in 2019, Raiche spent five years in the Canadian Football League and served in top roles for the Toronto Argonauts and Montreal Alouettes. Now, she’ll hold a top position encompassing scouting, contracts, and player development.