After a thorough search, the Steelers look to have a general manager. The lengthy process that included more than a dozen executives from around the league is expected to include with an in-house staffer, with ESPN.com’s Adam Schefter reporting (via Twitter) Omar Khan will be the next Steelers GM. 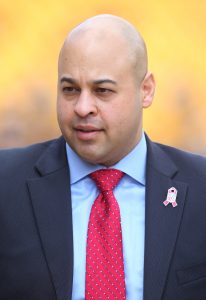 Khan, who was on the cusp of being the Texans’ GM last year, was one of the first names mentioned when Kevin Colbert announced he would step down after the draft. One of the six execs to receive second interviews for this position, Khan is set to rise to the top of Pittsburgh’s front office.

Shortly after the news of Andy Weidl becoming the Steelers’ assistant GM emerged, veteran NFL reporter Aditi Kinkhabwala pointed to a Khan hire. The Steelers will team two of their GM finalists together to head up their post-Colbert front office. While this represents a major change for the Steelers, given Colbert’s 21-plus-year tenure with the franchise, they are going with continuity.

Khan, who worked as the team’s vice president of football and business administration for the past six-plus years, has been with the franchise since 2001. Khan and Weidl’s Steelers tenures did not overlap, with Weidl wrapping his late-1990s internship before Khan’s arrival. But teaming a Pittsburgh native with a 21-year staffer goes heavy in the familiarity direction.

The 45-year-old exec was on board for the Steelers’ three Super Bowl trips from 2005-10 and has played an integral role in managing the team’s salary cap. He worked in his previous position since 2016. The longtime Steelers exec generated interest from other teams in recent offseasons, but he will end up leading the franchise he knows best.

Houston was believed to be negotiating a deal to name Khan as its GM last year, but the franchise backtracked late in the process and hired longtime target Nick Caserio. Khan also interviewed for the Panthers’ GM post in 2021, meeting with Carolina brass twice for the role. That job ended up going to ex-Seahawks exec Scott Fitterer. This year, Khan met with the Bears about their GM vacancy; they hired former Chiefs staffer Ryan Poles.

Colbert presided over the team’s Ben Roethlisberger era, the second-most successful period in franchise history. After becoming one of Colbert’s top lieutenants, Khan will be paired with 16th-year HC Mike Tomlin in attempting to keep the team on the contender tier. The Steelers operated intently at quarterback in the draft, selecting their preferred passer (Pitt’s Kenny Pickett) 20th overall — two rounds before the rest of this year’s top QB prospects came off the board. Pickett and free agency addition Mitchell Trubisky will vie to be the team’s Week 1 starter, but the Khan era will be tied to Pickett in its early years.