The Giants have added a veteran to their running back room. The team announced the signing of Matt Breida on Monday.

Breida, 27, started his career with the 49ers as a UDFA. He spent three seasons there, with his best campaign coming in 2018. He totalled 814 yards and three touchdowns on the ground, along with 261 yards and two more scores in the passing game.

San Francisco then traded him to the Dolphins as part of a draft-day deal. In his lone season in Miami, he started only one of 12 games played, recording 350 scrimmage yards. He then signed with the Bills one year ago, though again he was simply a depth piece. He played only 81 snaps, meaning it doesn’t come as a surprise he is on the move for the third consecutive offseason. Given the presence of Joe Schoen and Brian Daboll in New York, though, Breida will be a familiar face for his new employers.

There are plenty of question marks surrounding the Giants’ RB room at the moment. The most important storyline with regards to the position – if not the team as a whole – is the future of Saquon Barkley. While a trade of the former No. 2 overall pick isn’t imminent, it is still a possibility. Regardless of whether or not Barkley stays in the Big Apple, there should be playing time available for Breida given the recent release of fellow veteran Devontae Booker. The speedster will look to improve a Giants offense which averaged less than 100 yards per game on the ground in 2022.

Matt Breida will leave the Dolphins but stay in the AFC East. The Bills are signing the four-year veteran running back, Ian Rapoport of NFL.com tweets. Breida is expected to sign a one-year deal. The Bills announced the move.

The Dolphins acquired Breida from the 49ers during the 2020 draft but did not receive much production from the elusive back. Breida, however, has rushed for more than 600 yards in multiple seasons — including 814 in 2018 — and is one of the league’s fastest ball carriers. He will join Devin Singletary and Zack Moss in Buffalo.

The 49ers shipped Breida to the Dolphins for a fifth-round pick, but he ended last season with just 254 rushing yards despite having played in 12 games. Miami has since pivoted to former Rams back Malcolm Brown, who will team with Myles Gaskin. The Bills’ backfield suddenly looks crowded, with Breida set to vie for time with recent Day 2 picks.

A former UDFA out of Georgia Southern, Breida played a key role for multiple Kyle Shanahan offenses. He topped five yards per carry in both 2018 and ’19, doing so on 153 carries in 2018. Raheem Mostert ended up usurping Breida in San Francisco, but Breida still helped a 49ers backfield that was without high-end signing Jerick McKinnon for two full seasons. The 26-year-old back will look to re-establish his career in Buffalo.

Dolphins Have Not Discussed Extension For RB Matt Breida

The Dolphins acquired running back Matt Breida from the 49ers in exchange for the No. 153 overall pick in this year’s draft, and Breida is scheduled for unrestricted free agency at the end of the 2020 season. However, Barry Jackson of the Miami Herald writes that the team has not discussed an extension with Breida.

Of course, extensions are hard to come by right now in light of the uncertainty created by COVID-19, and even under better circumstances, the Dolphins may not be too keen on a multi-year commitment. Breida, a 2017 UDFA, has yet to total more than 153 carries in a season, has battled injuries throughout the early part of his career, and will enter the 2020 campaign in a timeshare with free agent acquisition Jordan Howard.

On the flip-side, Breida has looked good in his relatively limited action to date. He boasts a career 5.0 yards-per-carry average — a mark that he exceeded in both of the past two seasons — excellent speed, and is a useful receiver out of the backfield. The 49ers tendered him at the second-round level prior to trading him, and there is reason to believe that he can be a productive starter in the NFL.

But one wonders if Breida would be open to an extension anyway. After all, he is a more explosive back than Howard — whose career has trended downwards since he made the Pro Bowl as a rookie in 2016 — and Breida could start seeing the lion’s share of the carries as the 2020 season wears on. If that happens, he will be well-positioned for a significant new deal from the Dolphins or some other club next year, while an extension now would probably be more modest in scope.

Breida joins Raekwon McMillan and Davon Godchaux as the Dolphins’ top impending unrestricted free agents, but it sounds like the ‘Fins are more receptive to an extension for their two young defenders than for Breida.

The 49ers are shaking up their backfield and sending a member of their surplus to south Florida, dealing Matt Breida to the Dolphins for the No. 153 overall pick, Ian Rapoport of NFL.com tweets. 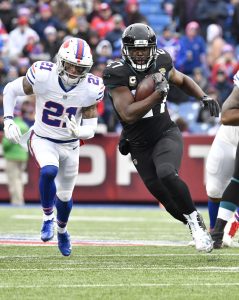 Miami did not previously address its backfield need but made multiple overtures to teams dangling veterans. The Dolphins discussed a Leonard Fournette deal with the Jaguars, Mike Garafolo of NFL.com notes (on Twitter). Those talks occurred in March, however, and did not appear to lead to a serious change Fournette would change Florida cities.

With Jerick McKinnon still in the picture for the 49ers and three other backs in that mix as well, the defending NFC champions were a candidate to make a deal. Breida is entering a contract year and was mentioned as a possible trade chip earlier this offseason. While he was the odd man out for carries in Super Bowl LIV, Breida has displayed intriguing skills during his three-year 49ers run and looks to have a much clearer path to carries in Miami than he did in San Francisco.

The speedy ex-UDFA surpassed 600 rushing yards in each of the past two seasons, filling in for McKinnon in 2018 and being part of a productive timeshare with Tevin Coleman and Raheem Mostert last season. Breida eclipsed 5.0 yards per carry in each of the past two years. The 49ers still have Coleman, Mostert, McKinnon and Jeff Wilson under contract. They turned to Mostert, a career special-teamer, last season and appear prepared to give him more work.

Fournette remains in Jacksonville, though his place there is certainly less certain than it was exiting last season. The Jags have engaged in Fournette trade talks for over a month but have not found trade talks to be particularly enticing. Fournette has one season left on his contract, but the Jaguars have another week and change to decide on his fifth-year option.

With their No. 153 pick, the 49ers took West Virginia offensive lineman Colton McKivitz.

49ers running back Matt Breida has signed his tender, as Adam Schefter of ESPN.com tweets. Per the terms of the second-round level cuff, Breida will earn $3.1MM in 2020.

The Niners reportedly used the second-round tender on Breida because they sensed that at least one other team was fixing to poach him at the original-round level. That doesn’t necessarily mean that he’s in the team’s plans for 2020 – reportedly, the Niners tendered him with the thought that he could be traded at a later date.

With Raheem Mostert and Tevin Coleman in the fold, Breida isn’t on track for a major role in the 49ers’ backfield. Jerick McKinnon is also in the mix – many thought that the Niners would cut Jet this offseason, but he’s on the books at a cheaper rate following his mid-March haircut.

At times, Breida impressed – he’s averaged at least 5.1 yards per tote in each of the last two seasons. Unfortunately, he hasn’t been able to stay healthy. Over the course of three seasons, the Georgia Southern product has totaled just 381 carries.

Despite suffering a leg contusion against the 49ers on Monday night, Seahawks wide receiver Tyler Lockett is expected to be available when Seattle returns from its bye in Week 12, according to Adam Schefter of ESPN.com (Twitter link). Lockett spent time at the hospital after injuring his leg (in what was called a “pretty severe situation” by head coach Pete Carroll), but he’s since flown back to Seattle. In the midst of a second consecutive excellent campaign, the 27-year-old Lockett has posted 62 receptions for 793 yards and six touchdowns through 10 games.