Late last week, the Raiders cut fan favorite Marquette King in a move that was ostensibly about money. By releasing the punter, Oakland saved $2.9MM against the cap, but apparently that was not the only factor. King’s personality did not jibe with coach Jon Gruden, Vic Tafur of the San Francisco Chronicle (on Twitter) hears. 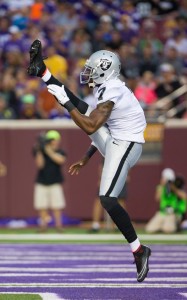 Some of Gruden’s concerns may have been rooted in the on-field impact of King’s antics. While King is among the best at his position, he has tallied four personal fouls over the last two seasons. One of his most memorable moments came in December 2016 when the Bills were flagged for roughing the punter and King received a penalty of his own when he danced with the flag.

King’s personality won’t dissuade other teams from pursuing him. The Vikings reached out to King immediately after he was cut and more clubs are sure to follow this week.