The Cowboys are checking in on an old friend. They brought in veteran cornerback Brandon Carr for a visit Friday, Field Yates of ESPN.com tweets.

A Cowboys starter from 2012-16, Carr spent the past three seasons with the Ravens. Despite Baltimore’s deep cornerback group, Carr continued his start streak — one that now sits at 192 games. Baltimore declined Carr’s 2020 option.

Carr, 34, has also seen time at safety. The Ravens used him there at points last season, and the Cowboys have a sudden need after making Ha Ha Clinton-Dix a surprise cut. Carr’s ex-teammate, Earl Thomas, has not been connected to the Cowboys in several days.

Carr certainly brings more experience than any current Cowboys defender — and just about any active NFL DB — and is among the most reliable players of his generation, availability-wise.

Pro Football Focus has viewed Carr’s work as average to slightly above average in recent years, but he still played 76% of the snaps for a strong Ravens defense last season. With the Cowboys, Carr lived up to his iron-man reputation. He never played fewer than 94% of Dallas’ defensive snaps in any of his six seasons with the team.

Yet another cornerback is going to hit the open market. The Ravens are expected to decline Brandon Carr’s option and send him to free agency, according to Jamison Hensley of ESPN.com (Twitter link).

We had heard the Ravens were unlikely to retain Carr if they brought back fellow corner Jimmy Smith, and now it sounds like Carr will be moving on even if Smith isn’t back. Carr will turn 34 in May, but he started all 16 games for Baltimore this past season. Carr has been remarkably durable, never missing a game or start in his 12-year career. Originally a fifth-round pick out of tiny D2 school Grand Valley State back in 2008, Carr has carved out quite the career for himself.

He’s never been elite or made the Pro Bowl, but has been a solid starter for many years. He spent the first four years of his career with the Chiefs and then five with the Cowboys, before signing a four-year, $23.5MM pact with the Ravens in 2017. With Marlon Humphrey and Marcus Peters, who they acquired in a trade last season, both under contract, Carr became more expendable.

His playing time was reduced after the Peters trade, and it’s clear the Ravens want to get younger at the position. Humphrey is 23 and Peters is 27. All eyes will now turn to Smith, and the last we heard is that he’s planning on testing the open market while the two sides are both still interested in a potential reunion.

The Ravens have exercised cornerback Brandon Carr‘s 2019 option, per ESPN’s Field Yates (via Twitter). 2019 will be the third year in Baltimore for the remarkably durable Carr, who has never missed a game or a start in his 11-year career. 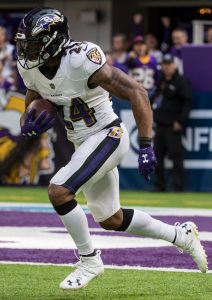 Carr signed what was officially a four-year pact with the Ravens in March 2017, but it was really a one-year deal with a series of options. He has been rumored as a cap casualty to some degree in each of the past two offseasons, but his overall solid play and durability have made him quite valuable to Baltimore’s secondary.

He is by no means a superstar, but he graded out as an above average corner in 2018 per Pro Football Focus’ advanced metrics, and he has secured six interceptions over the past two seasons. He serves as a strong complement to Jimmy Smith and rising star Marlon Humphrey.

Smith has been rumored as a cap casualty himself, but given the way the Ravens’ secondary has been depleted by injury prior in recent years (2018 excluded), it would be somewhat surprising if he were released, though he may be asked to take a pay cut. Carr, Smith, and Humphrey form one of the best CB trios in football, and rumor has it that they may soon be joined by a big-name safety like Tyrann Mathieu.

The Steelers‘ plan remains to trade Antonio Brown. But Kevin Colbert reiterated they will not pull the trigger if they do not believe the compensation is appropriate.

“We will only make a trade if it benefits the Pittsburgh Steelers,” Colbert said, via Kevin Seifert of ESPN.com. “He knows that. His representation knows that. That’s been clearly explained, and we’re willing to take a look. If there’s something that can be done to benefit both sides, great. If not, then we’ll deal with that when we get to it.”

Pittsburgh still wants to trade Brown to the NFC, but Jeremy Fowler of ESPN.com tweets the organization is prioritizing compensation over a preferred destination. Colbert said an intra-division trade is not ideal but did not put the Bengals, Browns or Ravens as non-starter suitors, saying “we haven’t eliminated anybody” from the trade picture. Colbert added more teams have reached out, which makes sense with all 32 teams in Indianapolis for the Combine. The Steelers would seemingly prefer to deal Brown before March 17, when his $2.5MM bonus is due, but Colbert said (via Pro Football Talk, on Twitter) the team is open to paying him the bonus and trading him later.

With just less than four weeks remaining until the trade deadline, Le’Veon Bell-to-the-Eagles has surfaced on the rumor circuit. The Eagles are reportedly giving serious consideration to making a run at the likely rental running back. But SI.com’s Albert Breer isn’t so sure that’s going to happen. The Eagles don’t see running back as a spot to sink major resources into, per Breer. Bell’s approximately $10MM salary would qualify as a major investment, although that’s dropping by the week because of this unusual holdout. Philadelphia has just less than $5MM in cap room, and Breer notes the improving health of its running backs should help them steer clear of these interesting Bell sweepstakes. Corey Clement and Darren Sproles have yet to return to practice, and Jay Ajayi is playing with a back fracture. The Eagles traded a fourth-rounder for Ajayi before the 2017 trade deadline. Bell as of now plans to report to the Steelers during their Week 7 bye.

Here’s the latest from around the league as Week 5’s first game continues: