The Ravens are interested in bringing Terrell Suggs back for the 2019 season, according to Adam Schefter of ESPN.com (on Twitter). Suggs is intent on playing for a 17th season, so it could be a matter of time before the two sides agree to a new deal. 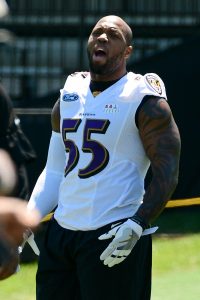 Suggs is 36, but he has plenty left in the tank. Last year, Suggs recorded seven sacks, bringing his career total to 132.5. In the previous year, Suggs finished out with eleven sacks, leading to his seventh-career Pro Bowl nod.

Down the stretch of the season, Suggs claimed he wasn’t dwelling on his future in Baltimore. Still, it’s hard to picture him in any other uniform.

“Nah, there’s a lot of things that are always a possibility,” Suggs said. “You can’t really harp on the negative. It possibly could but that hasn’t crossed my mind like, ‘Oh my God.’ We’ve got business to handle. We’ll cross every bridge when it’s time to come there.”

The time to handle that business will likely be this week at the combine.