The Eagles are giving “serious consideration” to the prospect of trading for Le’Veon Bell, Jason La Canfora of CBS Sports said during a radio interview with Jon Marks and Ike Reese of Sports Radio WIP (Twitter link).

The Eagles have been mulling this trade for a while, per La Canfora, who believes a third-round pick may be enough to get a deal done (Twitter link). 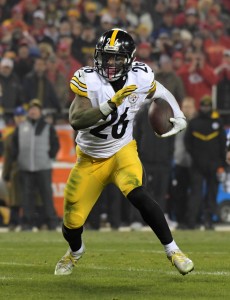 Bell said he would report to the Steelers during their Week 7 bye, but La Canfora doubts he’ll ever play for Pittsburgh again, citing the bridge being burned. Pittsburgh’s still listening to offers, and one could come from the other Pennsylvania franchise. The Eagles’ interest surfaced over the weekend, with La Canfora reporting the defending Super Bowl champs were among the pursuing franchises. The Jets and 49ers join them.

This year’s trade deadline looms in just less than four weeks. The Eagles would have to clear some cap space to afford Bell. While the 26-year-old All-Pro’s price tag continues to drop because of his holdout, it’s still north of $10MM. Philadelphia has $4.3MM in cap space as of Wednesday. The obvious space-clearing move would be to unload backup quarterback Nick Foles, but given Carson Wentz‘s recent return, it would be incredibly risky for the Eagles to do this.

That said, Philadelphia has a unique championship window. Wentz is attached to his rookie deal through at least the end of this season. It’s possible the Eagles, whose 2019 cap sheet represents the NFL’s worst projected situation going into the next league year, could keep Wentz on this deal through 2019 — since he can be controlled on this contract through 2020 via the fifth-year option — but it should be expected for negotiations on a mammoth extension to commence in 2019.

Philly’s seen injuries consistently affect its running back corps. Jay Ajayi is playing with a back fracture, and both Darren Sproles and Corey Clement missed last week’s game. Sproles remains without a clear return timetable. Wendell Smallwood, who had to fight to make the Eagles’ roster as the No. 4 back, was Ajayi’s backup on Sunday.

The Eagles pulled off a major running back trade last year when they acquired Ajayi for a fourth-round pick. It would cost more to obtain Bell, however, although JLC considers a second-round pick an “ambitious” on the Steelers’ part. And Bell would surely be a rental commodity given Philly’s 2019 cap situation. Bell will voyage into a rare free agency situation next year, given his workload history and age, but can still be expected to land a deal in the vicinity of what Todd Gurley and David Johnson are making. The Eagles wouldn’t seem a candidate to authorize that contract, but for this season, it would make sense for the 2-2 team to add another weapon while this title window is open.

Pittsburgh’s 1-2-1 and could also obviously use Bell. It’s made preparations to fit Bell’s franchise tag price into its 2018 cap picture, having restructured several veterans’ contracts to clear space. But the Steelers and Bell waged contract battles for two offseasons, and multiple offensive linemen called out the running back for not reporting prior to Week 1.