De’Vante Harris is returning to the Buccaneers on a one-year deal, the team announced. The cornerback was previously non-tendered by the organization, making him an unrestricted free agent.

The 25-year-old was picked up by Tampa Bay last offseason after being waived by the Saints. He started the season on the injured reserve and was later waived by the Bucs, but the team re-signed him a month later. Harris proceeded to play in 10 games for Tampa Bay, compiling nine tackles and three passes defended. The former Texas A&M product has 31 career games under his belt.

He’ll be rejoining a crowded cornerbacks depth chart in Tampa Bay. If Harris has any hope of playing a significant role, he’ll have to somehow jump at least one of Vernon Hargreaves, Carlton Davis, Ryan Smith and David Rivers III.

De’Vante Harris will be looking for a new home. Nick Underhill of The New Orleans Advocate reports (via Twitter) that the Saints have cut the cornerback. 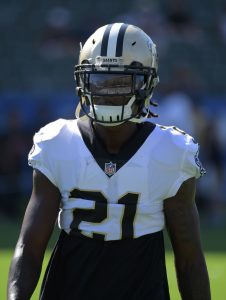 The 25-year-old initially joined the Saints as an undrafted free agent out of Texas A&M back in 2016, and he proceeded to spend most of the next two seasons on the active roster. After playing in 10 games as rookie, Harris made 11 appearances (one start) for the Saints last season.

While he finished with career-highs in tackles (18) and passes defended (two), he seemed to lose the faith of the New Orleans coaching staff. He started the season in a primary role, but was demoted to special teams midway through the year. An injury to Marshon Lattimore forced him back into the lineup.

Harris was already going to be hard pressed to make the Saints on a crowded cornerback depth chart. Following his release, the team will be eyeing Ken Crawley, P.J. Williams, Justin Hardee, Arthur Maulet, and Kamrin Moore for backup reps.

The concussion Coby Fleener sustained against the Rams last week induced the Saints to place their starting tight end on IR, Nick Underhill of The Advocate tweets. 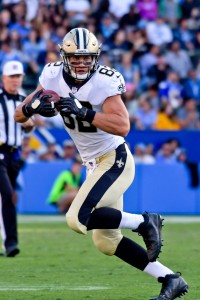 Ian Rapoport of NFL.com reported this week Fleener’s concussion could linger. He was declared out for this week. To replace Fleener on the 53-man roster, the Saints promted tight end Garrett Griffin from their practice squad, Rapoport tweets.

The Saints also waived cornerback De’Vante Harris, per Herbie Teope of NOLA.com (on Twitter), and promoted cornerback Arthur Maulet from the practice squad.

Fleener has not missed a game since his rookie season, suiting up for all 16 of the Colts’ contests from 2013-15 and each of the Saints’ games last season. He played in 11 New Orleans tilts this year prior to a nasty Blake Countess hit in Los Angeles.

The former second-round pick has become a lower-end target for Drew Brees this season, averaging 26.8 yards per game, but still leads the Saints’ tight ends by a healthy margin. Fleener caught two touchdown passes this season, but it will mark by far his lowest receiving output since his rookie year. He finished with 631 air yards last season. Josh Hill, Michael Hoomanawanui and now Griffin comprise the tight end contingent on New Orleans’ active roster.

Fleener is under contract through the 2020 season.