Marcus Sherels could be calling it a career. There’s a “50-50” chance the Vikings special teams ace retires, reports Chris Tomasson of TwinCities.com. The veteran will likely test free agency before making a decision. 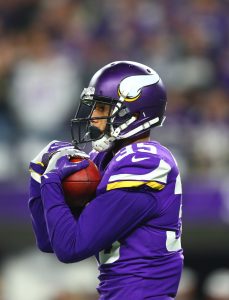 The 32-year-old has spent much of his career with the Vikings organization, but 2019 saw him testing new waters. Minnesota didn’t make him an offer last offseason, leading to Sherels signing with the Saints. He was let go by New Orleans at the end of the preseason and went back to the Vikings, but Minny released him in late October. Following a brief stint with the Dolphins, Sherels once again signed with the Vikings. He ultimately appeared in eight total games last season, returning 12 punts.

The 2010 undrafted free agent out of Minnesota has compiled 2,503 punt return yards during his 10-year career, and his 2,480 yards with the Vikings is a franchise-best. Sherels has also returned 57 kickoffs during his career, and he has 108 tackles and one interception. Tomasson notes that it “would not be a surprise” if the front office moves on from the veteran.

With only $1.3MM of salary cap space, the front office will have to make some tough decisions this offseason. We’ve already learned that one of those decisions involves safety Anthony Harris, who sounds likely to leave Minnesota when free agency opens in March.

The Saints have agreed to sign return specialist Marcus Sherels to a one-year deal, as Chris Tomasson of the Pioneer Press writes. Sherels spent the previous nine seasons with the Vikings and he’ll look to carve out a role with another promising NFC team.

Sherels, an undrafted player out of the University of Minnesota, joined up with the Vikings in 2010. Before today’s signing, Sherels tied Everson Griffen as the team’s longest tenured player. Griffen will stay put after agreeing to a revised contract, but Sherels is headed south.

Last year, Sherels averaged 12 yards per punt return, marking the fourth time he’s eclipsed 11 yards per try in his career. Without him, the Vikings will have to look into other punt return options and they may have a few in-house between cornerback Mike Hughes and wide receivers Chad Beebe and Brandon Zylstra. Also, as Tomasson notes, new running back Ameer Abdullah volunteered his services, even though he has yet to return a punt at the pro level.

The Saints, meanwhile, seem to have an affinity for ex-Vikings. In the last week, the Saints have also signed running back Latavius Murray and offensive lineman Nick Easton.