Mentioned in trade rumors to start the week, Teven Jenkins has not practiced with the Bears since Day 1 of training camp. Due to the unknown ailment he is currently battling and last year’s back injury, Jenkins has participated in just one training camp practice since being chosen in the 2021 second round. He does not look to be factoring into Chicago’s first-string tackle mix. Recently signed veteran Riley Reiff does, and Brad Biggs of the Chicago Tribune expects the 11th-year blocker to be the team’s left tackle starter. Reiff spent most of his career as an NFC North left tackle but played on the right side for the Bengals last season. Larry Borom, Chicago’s primary right tackle during his 2021 rookie season, should be considered the favorite to stay in that role, Biggs adds. The Bears ditched their five-year tackle setup last summer, cutting Bobby Massie before the ’21 draft and releasing Charles Leno after selecting Jenkins. Leno has since signed a three-year, $37.5MM extension with the Commanders. 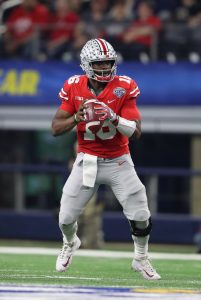 J.T. Barrett is getting another shot at an NFL gig. The journeyman quarterback is joining the Cowboys on a tryout basis, reports ESPN’s Todd Archer. Dallas is also auditioning quarterback Brady Davis. 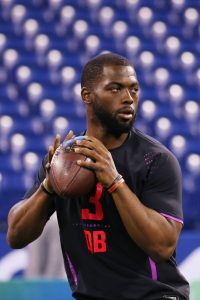 Barrett had a standout career at Ohio State, earning three first team All-Big-Ten nods and setting a number of school records. He ultimately finished his collegiate career with a 38-6 record, tossing 104 touchdowns vs. only 30 interceptions. While many of his teammates were ultimately drafted following their stints with the Buckeyes, Barrett went undrafted in 2018.

Since that time, the quarterback hasn’t been able to hold a steady gig in the NFL. He’s had two stints with the Saints, and he also spent time with the Seahawks and Steelers, but the 26-year-old has yet to see the field for a regular season game. 2020 was the first season where Barrett didn’t have a job, so this could be his final chance to crack an NFL roster.

While he has some familiarity with a handful of Cowboys players (including college teammate Ezekiel Elliott), Barrett will be hard pressed to make the regular season roster. Barrett will have to leap at least two of Cooper Rush, Garrett Gilbert, and Ben DiNucci for the opportunity to be one of Dak Prescott‘s backup.

Davis, an undrafted free agent in 2020, split his collegiate career between Memphis and Illinois State. In 27 games for the Redbirds, the quarterback compiled 3,514 passing yards, 28 touchdowns, and 14 interceptions.