Apparently, the Giants liked what they saw from Kelvin Benjamin. After bringing Benjamin in for a tryout this weekend, New York has agreed to terms with the former first-rounder, as Jordan Raanan of ESPN.com reports (via Twitter). 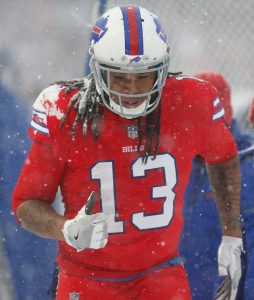 Benjamin, of course, entered the league as a wide receiver, and that’s where he has played since Giants GM Dave Gettleman — then the general manager of the Panthers — drafted him in 2014. But Benjamin primarily worked out as a tight end during this weekend’s visit, so it appears he is undergoing a position change.

Now 30, Benjamin’s size (6-5, 245 pounds) makes him something of a natural fit at TE. And given that his career fell off a cliff after he was traded from Carolina to the Bills midway through the 2017 season, he almost had to try something different. Indeed, after spending the final few games of the 2018 campaign with the Chiefs following his release from Buffalo, there were no public reports of interest in his services until he got a call from the Giants.

With Evan Engram and free agent acquisition Kyle Rudolph ahead of him on the depth chart, Benjamin will battle for a a TE3 job alongside the likes of Levine Toilolo and Kaden Smith. Ralph Vacchiano of SNY.tv believes Benjamin is facing an uphill battle in his quest for a regular season roster spot (Twitter link), but his background as a receiver and his physical stature make him an intriguing low-risk flier just the same.

Benjamin is the second of the five veterans Big Blue recently invited to the facility to get a contract. RB Corey Clement has also put pen to paper, and as Dan Duggan of The Athletic tweets, the Giants waived RB Jordan Chunn and TE Nate Wieting to make room for Clement and Benjamin on the 90-man roster.

The Cowboys are adding reinforcements as the Ezekiel Elliott saga drags. On Monday, they promoted running back Jordan Chunn to the 53-man roster. His roster spot will be freed up by placing Connor McGovern on injured reserve.

If Elliott doesn’t show for the season opener, Chunn would serve as the Cowboys’ No. 3 running back behind Tony Pollard and Alfred Morris. Dallas will also have fullback Jamize Olawale on hand to clear the way.

McGovern, a third-round pick, suffered a setback in August that will require some extra time to heal. If his torn pectoral muscle cooperates, he could still be eligible to return for the second half of the season, per league rules.