Three months after catching on with the Browns, Damion Square is back in free agency. The Browns released the veteran defensive lineman Thursday, doing so to clear a spot for the signing of wide receiver JoJo Ward. 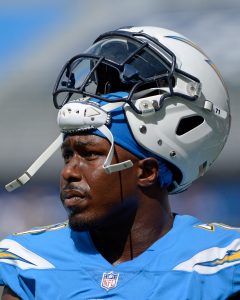 Square came to Cleveland after six-plus seasons in Southern California. The Chargers kept the backup/occasional starter around from 2014-20, re-signing him in 2016, 2017, 2019 and 2020. Los Angeles’ new coaching staff did not bring him back for an eighth season.

Square, 32, entered the NFL as an Eagles UDFA before bouncing to the Chiefs and Chargers. He started 24 games for the Bolts, recording 6.5 sacks and logging a 51% defensive snap rate for a 12-4 Charger squad in 2018. The Browns were busy on their D-line this offseason, adding the likes of Jadeveon Clowney, Takk McKinley and Malik Jackson. They also have defensive tackle Andrew Billings back from a 2020 opt-out.

Ward was productive at Hawaii, serving as one of Cole McDonald‘s top targets. In two seasons at the Mountain West program, the 5-foot-9 wide receiver totaled 1,999 receiving yards and 20 touchdown catches. A 2020 UDFA whom the Cardinals cut earlier this week, Ward has yet to play an NFL snap. He spent last season on Arizona’s practice squad and signed a reserve/futures deal with the team in January.

A practice squad opportunity may be Ward’s best hope in Cleveland. He will join a Browns receiving corps that does not feature many open spots, with the likes of Rashard Higgins, Donovan Peoples-Jones, KhaDarel Hodge and third-round pick Anthony Schwartz in place behind starters Odell Beckham Jr. and Jarvis Landry.