Redskins linebacker Cassanova McKinzy suffered a torn pectoral muscle in Thursday’s loss to the Cowboys, according to Ian Rapoport of NFL.com (on Twitter). McKinzy was out of football for two years due to injury, so it’s undoubtedly frustrating for the 26-year-old. 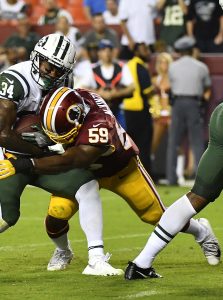 McKinzy returned to the Thanksgiving contest after exiting with a shoulder injury, but a torn pec is a far more serious injury. The Redskins will be forced to shut McKinzy down for the year and place him on the injured reserve list this week.

McKinzy, an Auburn product, appeared in three games for the Redskins this year. The club has him under control through next season at a $570K cap number with no guarantees.