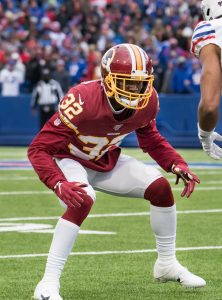 Houston waived Moreland on Sunday, doing so after claiming him just before last season. A James Madison alum who became a Washington seventh-round pick in 2019, Moreland has not yet made it to free agency, being claimed twice. One season remains on Moreland’s twice-passed-around rookie contract.

Moreland, who intercepted a school-record 18 passes at James Madison and scored six defensive touchdowns, started five games for Washington in both the 2019 and ’20 seasons. He intercepted a pass in 2020 and allowed just a 74.1 rating while in coverage that season. Washington waived Moreland with an injury designation in 2021, leading to a Texans claim. He played in seven games and saw only eight defensive snaps with Houston last season.

The 5-foot-11 defender profiles as an option in the slot, with The Athletic’s Zach Berman noting he may represent competition for Josiah Scott to become Avonte Maddox‘s inside backup (Twitter link). If nothing else, Moreland provides more experience to a cornerback group that lacked it beyond Maddox and Darius Slay last week. Tay Gowan, Zech McPhearson and Kary Vincent were 2021 draftees; Gowan and Vincent did not see much playing time as rookies.

To make room for Moreland on their offseason roster, the Eagles waived defensive end Joe Ostman with a failed-physical designation.

The Eagles made a sizable amount of cuts Thursday. They made the rest of their moves to get down to 53 players Saturday. Here are the players the Eagles jettisoned to reach the regular-season limit.

The Brooks decision certainly is interesting, especially after the team placed left tackle Andre Dillard on season-ending IR this week. Brooks suffered a torn Achilles’ tendon in June, but the elite blocker has a history of surmounting such an injury. Brooks tore an Achilles in January 2019 and made it back in time for Philadelphia’s opener last season. The team is not ready to shut down its Pro Bowl guard for the season.

Alshon Jeffery also did not land on Philadelphia’s reserve/PUP list, which would have shelved the veteran wideout for six games. Instead, Jeffery — whom the Eagles have attempted to trade for months — is one of seven receivers on the Eagles’ 53-man roster. That will help a team that saw Marquise Goodwin opt out and first-round rookie Jalen Reagor suffer an injury that will keep him out to start the season.