The Saints have re-signed safety D.J. Swearinger to a one-year deal, as Aaron Wilson of the Houston Chronicle was first to report (via Twitter). The club picked up Swearinger towards the end of the 2019 campaign, and he played in New Orleans’ regular season finale.

Of course, the Saints made a more notable safety signing when they inked Malcolm Jenkins to a four-year pact earlier this week, but free agent Vonn Bell appears likely to sign elsewhere, so Swearinger could provide useful veteran depth and special teams work.

The Saints are Swearinger’s sixth team in his seven-year pro career. He has been a starter for most of that time, but he has a reputation for being a difficult locker room presence, which has led to something of a nomadic life for the former second-rounder. Still, he is just 28 years old and is not too far removed from providing solid, starter-level play, so it’s a worthwhile signing for the Saints.

And New Orleans is not taking too much of a financial gamble. Swearinger’s contract is worth $1.1MM, which, as Katherine Terrell of The Athletic tweets, makes him eligible for the veteran salary benefit under the new CBA. That means his cap hit will be just $800K.

D.J. Swearinger will march with the Saints. On Wednesday, the Saints officially signed the veteran and made room by dropping fellow safety T.J. Green. 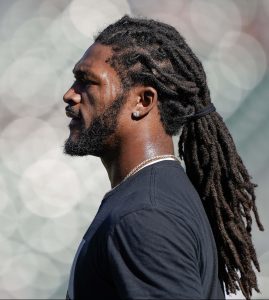 Swearinger becomes the second defensive back to join the Saints this week, following former Giants standout Janoris Jenkins. For the 28-year-old, it’s his third team of 2019.

Swearinger started the year with the Cardinals, but was dropped in late September. He hooked on with the Raiders in early November, but was jettisoned earlier this month along with Preston Brown and Terrell McClain. All in all, he has 48 tackles across eight games this season.

Green was promoted to the active roster just before the Saints Monday night win over the Colts. If he clears waivers, the Saints will be able to re-sign him to the practice squad. 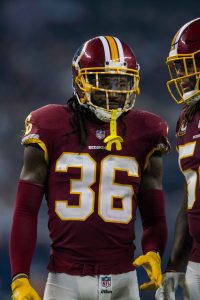 The Raiders will work out D.J. Swearinger on Monday, according to NFL.com’s Ian Rapoport (on Twitter). The safety has been on the open market since late September when the Cardinals cut him loose.

Before his release from Arizona, Swearinger started in all four of the Cardinals’ September games and played on every single snap. After viewing Swearinger as one of the NFL’s better safeties from 2016-18, Pro Football Focus ranked the seventh-year veteran as its No. 73 safety through the first quarter of the season. On the flipside – he’s still only 28 and the former second-round pick boasts 70 career starts for the Cardinals, Texans, Redskins, and Buccaneers.

Swearinger could join the Raiders’ safety group hours after Karl Joseph broke up Matthew Stafford‘s pass to seal the win against the Lions. The Raiders now sit a 4-4 with a chance to get above the .500 mark with a win over the Chargers on Thursday night.

The Eagles will have plenty of roster decisions to make heading into the 2019 season. Two of the names at the top of the list include veteran running Darren Sproles and oft-injured linebacker Jordan Hicks, Zack Rosenblatt of NJ.com writes.

After originally declaring this as his final season, Sproles has looked like a vintage version of himself, leading many to wonder if he would come back for his 15th NFL season. One person who would love to have the pass-catching back return is Eagles head coach Doug Pederson.

“I think Darren Sproles would be a great addition” for 2019, Pederson said. “He’s a great leader. he works hard, he’s a great mentor to a lot of young players. I think anybody would love to have a Darren Sproles. I mean, I would.”

He didn’t offer the same ringing endorsement for Hicks. Despite being a noted playmaker who ranks third on the team in tackles in 2018, the Texas Longhorns product has missed 21 games in his first four seasons, including four this season.

“I’ll worry about the roster in the spring when I get to the spring,” Pederson said. “Jordan’s been a big part of our success here and he helped us win the game last week and he’ll help us win another on Sunday.”