The Falcons are revamping their backfield, having added Mike Davis this offseason. Todd Gurley remains unsigned, while the team cut Ito Smith. However, the team’s new regime did not select a running back in this year’s draft. 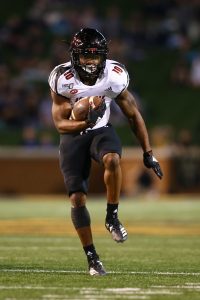 Atlanta will use undrafted free agency to add here, however. The team agreed to a UDFA deal with Louisville running back Javian Hawkins, according to NFL.com’s Tom Pelissero (on Twitter).

Hawkins surpassed 1,500 rushing yards for the Cardinals in 2019 and averaged 6.2 per carry as a junior last season. That slate stopped after eight games; Hawkins opted out during the season and declared for the draft. Scouts Inc. viewed Hawkins as a seventh-round-caliber prospect. He will join a Falcons team in a full-on transition at running back.

The top three ball carriers on Atlanta’s 2020 roster — Gurley, Smith and Brian Hill — are no longer with the team. Hill played on an RFA tender last season but has not been signed. Qadree Ollison, a 2019 fifth-round pick, joins Tony Brooks-James behind Davis on Atlanta’s depth chart.

The Falcons’ lack of a draft investment in the position would seemingly open the door for a veteran to complement Davis. A number of high-profile backs — Le’Veon Bell, Adrian Peterson, Duke Johnson and longtime Falcon Devonta Freeman among them — reside in free agency. As it stands now, Hawkins would have a notable opportunity to make the Falcons’ 53-man roster.