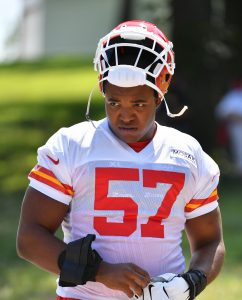 Speaks was selected by the Chiefs with the 46th-overall pick in the 2018 draft. The Ole Miss product had a solid rookie campaign, appearing in all 16 games (with four starts) while collecting 24 tackles, three tackles for loss, 1.5 sacks, and one forced fumble. Speaks also appeared in a pair of playoff games during his rookie season, compiling a pair of tackles.

He missed the 2019 season due to a knee injury, and while sitting on IR, he was suspended four games after violating the NFL’s substance-abuse policy. Speaks was reinstated late during the 2019 campaign and landed back on IR, and he ultimately won a ring after the Chiefs defeated the 49ers in Super Bowl LIV.

Speaks was waived at the end of the 2020 preseason, and he jumped around the NFL a bit during the regular season. Following a stint with the Raiders practice squad in October, the 25-year-old ended the season on the Cowboys’ taxi squad.

Speaks will sit on the Giants’ 90-man offseason roster with a non-guaranteed deal, and the pact guarantees that he won’t be scooped up by another squad. Teams are only allowed to use reserve/futures deals on players who weren’t on an active roster at the end of the 2020 regular season.