Ahead of the start of free agency, the Cardinals are taking care of one of their own. Arizona is re-signing linebacker Tanner Vallejo, a source told Ian Rapoport of NFL Network (Twitter link). 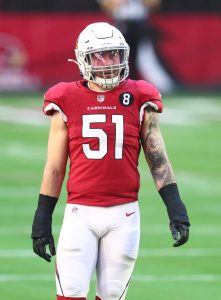 It’s a two-year deal worth $4.1MM, Rapsheet reports. Vallejo had been set to hit unrestricted free agency before getting locked up. It’s a nice payday for the 2017 sixth-round pick who spent his first few years in the NFL bouncing around the league. Originally drafted by Buffalo, he spent his rookie season with the Bills, the following year with the Browns, and spent time with both the Cardinals and Washington in 2019.

He appears to have finally found a home in Arizona, playing in all 16 games in 2020. A core special teamer who played around 65 percent of the special teams snaps, Vallejo also managed to crack the field on defense a handful of times. He played almost the whole game in the Cardinals’ crucial Week 17 game against the Rams, and Rapoport writes that he’ll have a real role in Vance Joseph’s defense next year.