The Redskins and punter Tress Way have agreed to terms on a four-year extension worth more than $15MM, sources tell NFL.com’s Ian Rapoport (on Twitter). The new deal, which will be formally inked on Monday, will keep the Pro Bowler under club control through the 2024 season. 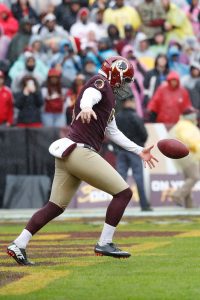 Way signed with the Bears as an undrafted free agent out of Oklahoma in 2013. After losing out on punting competitions in back-to-back offseasons, he found his home with the Redskins in 2014 when he took over for Robert Malone.

Since then, Way has averaged 46.6 yards per punt. This year, he’s been averaging a career-high 49.2 yards per try, thanks in part to a 79-yard bomb against the Panthers in Week 13. Way was named the NFC Special Teams Player of the Week for his work against Carolina and he received his Pro Bowl nod soon after.

Fans of the 3-12 Redskins haven’t had much to cheer for this year, but they do have one of the league’s better punters in Way. On Sunday, Way & Co. will have a chance to spoil the Cowboys’ season in their finale.

The Redskins signed punter Sam Irwin-Hill, according to a tweet from agent David Canter. Irwin-Hill is expected to compete with incumbent Tress Way for the starting job.

Naturally, as a punter, Way’s contract doesn’t have a ton of guarantees. If they feel strongly about Irwin-Hill, who has never punter in an NFL game, they can cut way with $750K in dead money on the cap.

Irwin-Hill spent last offseason with the Cowboys but ultimately lost out on that punting competition. He is an Arkansas product, which may have helped him get in with Jerry Jones.

4:54pm: Ian Rapoport of NFL.com (Twitter link) reports that it’s actually a four-year extension for Way — as noted below, the club announced the deal as a five-year extension, but was likely counting 2016, when Way was already under contract as an ERFA, as one of the years. The new deal is worth $9.4MM, per Rapoport, and contains $2.95MM guaranteed and a $1.25MM signing bonus.

3:46pm: Washington re-signed Tress Way to a five-year extension that would keep the third-year punter in D.C. for the decade’s remainder, Tarik El-Bashir of CSNMidAtlantic.com tweets.

Washington previously tendered the exclusive-rights free agent but elected to lock him up long-term.

Way, who will turn 26 in April, played in all 16 Washington contests upon taking over as the team’s punter in 2014. Arriving as an undrafted free agent in ’14, Way finished 13th last season with a 46.1-yards-per-punt average. The University of Oklahoma product boasted a 47.5-yard average in 2014.

We’ll round up Monday’s minor transactions from around the NFL below, with the latest moves added throughout the day to the top of the list: