The Titans have agreed to re-sign defensive lineman David King, according to Field Yates of ESPN.com (Twitter link). King had been slated to become an exclusive rights free agent, but he’s now inked a new one-year deal. 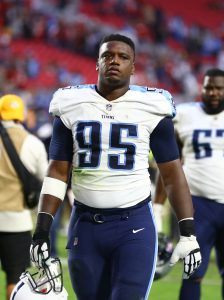 Because he was an ERFA, King had no negotiating rights. He’ll earn the minimum salary as he returns to Tennessee for the upcoming campaign.

King, 28, was a seventh-round pick in 2013, and last season marked his most successful campaign to date. Tennessee picked up King just prior to the start of the 2017 campaign, and he went on to play roughly a quarter of the club’s defensive snaps and 16% of the Titans’ special teams snaps.

Tennessee will be the fifth organization for the 27-year-old King, who entered the NFL as a seventh-round pick of the Eagles in 2013. King never saw any regular-season action in Philadelphia or Cincinnati, where he had a stint from 2013-14. He debuted in 2014 as a member of the Seahawks, with whom he appeared in seven games over two seasons. The rest of his on-field experience (three games) came in Kansas City over the previous two years. Thus far, King has picked up four tackles and 1.5 sacks in 10 games.

With his new club, King will join a Titans defensive end contingent that includes DaQuan Jones, Austin Johnson and Angelo Blackson, among others. At best, he’ll serve as depth behind those three.