Travaris Cadet wasn’t the only running back to work out for the Jets today. According to ESPN’s Adam Caplan (via Twitter), the team also auditioned Knile Davis.

The former Chiefs third-round pick has bounced around the league a bit since he was traded to the Packers last season. He ultimately appeared in two games for Green Bay (compiling only nine total yards) before being waived. He was subsequently claimed and waived by the Jets, and he landed back with the Chiefs later in the season, making brief appearances in the run and return game. He joined the Steelers this past offseason, but he was cut by the organization in early September.

Prior to his tumultuous 2016 campaign, Davis was plenty productive. 2014 was arguably his best NFL season, as the 25-year-old finished with 463 rushing yards and 147 receiving yards for seven total touchdowns. Since then, the running back has only collected 46 carries and seven receptions. Davis has also proven to be a weapon in the return game, as he’s averaged 26.8 yards and scored two touchdowns on 73 career kick returns.

Jets running backs have collected 267 yards through the first three weeks of the season, placing them in the bottom-10 of the NFL. However, it’s unlikely that Davis or Cadet would be able to displace the team’s current duo of Matt Forte and Bilal Powell. Besides the two veterans, the Jets are also rostering sixth-rounder Elijah McGuire.

The Steelers are releasing running back Knile Davis, according to Ian Rapoport of NFL.com.

The 25-year-old Davis joined the Steelers in March after stints with the Chiefs and Packers from 2013-16. All but two of his 57 appearances came in Kansas City, where he totaled 800 yards on 245 carries (3.3 yards per rush). He was barely a factor last year with either Chiefs or Packers last year, picking up just 18 carries.

The release of Davis leaves the Steelers with Fitzgerald Toussaint, Terrell Watson and third-round pick James Conner as their backups to star Le’Veon Bell.

Steelers star RB Le’Veon Bell has yet to sign his franchise tender, and Mike Florio of Pro Football Talk wonders if the club would consider rescinding the tender, just as the Panthers did with Josh Norman last year. The closer we get to training camp, the more difficult it would be for Bell land a contract on the open market that pays him even $10MM in 2017, much less the $12.1MM he stands to receive under the franchise tender, and if Pittsburgh were to rescind the tender late in the summer, Bell’s financial prospects would only worsen. In the meantime, the Steelers’ other backs will get ample opportunity to prove their worth, and Florio speculates that Pittsburgh could decide to save millions by severing ties with Bell if its other options could combine to approximate Bell’s production.

But given that the rest of the Steelers’ RB corps features the likes of Knile Davis, Fitzgerald Toussaint, and rookie James Conner, that notion seems almost laughable. Even if the Steelers were considering rescinding the tender, it’s not surprising that there have been no reports about it, as such decisions are made and executed swiftly to avoid the possibility that the player will catch wind of it and pounce on the tender. Nonetheless, if Bell is not lined up behind Ben Roethlisberger on Week 1 (assuming he’s not injured or suspended), it would be the surprise of the season.

The Steelers are signing running back Knile Davis, Adam Schefter of ESPN.com tweets. It’ll be a one-year deal.

Davis, a longtime backup in Kansas City, found himself buried on the Chiefs depth chart last year. When he got an opportunity to get away from Jamaal Charles, Charcandrick West, and Spencer Ware, he fell flat. Davis was traded to the Packers in mid-October, but he only got five carries in two games before being waived. He was claimed by the Jets the next day, but he was cut about three hours later when the team opted to sign free agent running C.J. Spiller. Davis circled back to KC and amassed just 23 yards off of 13 carries.

Davis had some quality games in 2013 and 2014 with Kansas City, but we haven’t seen him move the needle in a while. He’ll now try to catch on as a backup for Le’Veon Bell in Pittsburgh.

8:00pm: The Jets actually waived running back Troymaine Pope to originally make room for Davis, according to Mehta (via Twitter).

6:09pm: Knile Davis‘ tenure with the Jets didn’t even last three hours. According to Ian Rapoport of NFL.com (via Twitter), the team is planning on releasing the running back as they finalize a deal with veteran C.J. Spiller. Manish Mehta of the New York Daily News confirms (via Twitter) that the Jets will indeed by signing Spiller. Davis was claimed off waivers by the Jets earlier today. 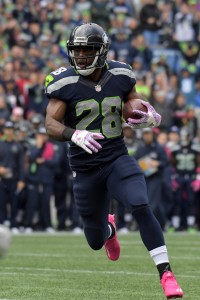 Similar to Davis, Spiller will be joining his third team this season. The 29-year-old started the campaign with the Saints, and he was quickly signed by the Seahawks following his release by New Orleans. The former first-rounder only had three rushes for nine yards during his two-game tenure in Seattle, and he added another five catches for 43 yards and a touchdown. The Seahawks ended up cutting bait with the veteran last week.

Spiller is certainly an upgrade over Davis, as the veteran running back put up solid numbers in 2015. During his lone full-season with the Saints, Spiller rushed for 112 yards on 36 carries. He also added another 34 catches for 239 yards and two scores. Meanwhile, Davis only collected 96 offensive yards in 2015, and he’s followed that up with only 21 total yards in 2016. Rapoport tweets that the Jets had been in talks with Spiller, but they claimed Davis as insurance in case the veteran didn’t sign. Ultimately, Spiller decided to take the Jets’ offer.

The Jets already have a crowded running back corps, led by Matt Forte and Bilal Powell. Spiller will likely compete with rookie Troymaine Pope to be the team’s third-string running back. Spiller will certainly get an opportunity, as he’ll be reunited with former Bills coach Chan Gailey, who is now the Jets’ offensive coordinator. Spiller’s best seasons came under Gailey, including a 2012 season where he rushed for 1,244 yards.

The Jets have claimed running back Knile Davis off waivers from the Packers, according to his agent (via Twitter). 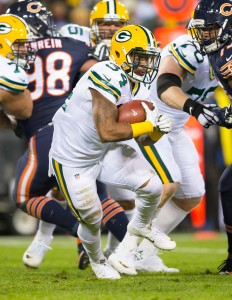 Green Bay acquired Davis from the Chiefs earlier this month after starter Eddie Lacy and primary backup James Starks were sidelined with injuries. However, his short stay in Wisconsin ended yesterday when the Packers cut him loose. Apparently, they saw enough out of him after he amassed just five yards off of five carries for them.

Now, Davis is hoping to find better results on his third team of the year. As it stands, Davis will join Matt Forte, Bilal Powell, and Troymaine Pope on the Jets’ running back depth chart, though it’s possible that Davis’ arrival could bump Pope from the roster.