The latest injury Kyle Long‘s sustained will result in a lengthy absence for the former Pro Bowl blocker. The Bears announced they’ve placed their top guard on IR on Saturday. 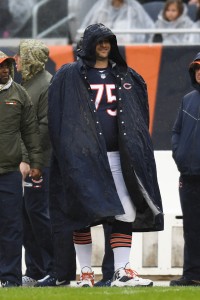 Long suffered a foot injury in Week 8 and was expected to miss between one and two months of action. It will now be at least two, per IR rules. The sixth-year veteran cannot return until Week 17, if the Bears were intent on bringing Long back. It would be an interesting decision if the Bears were contending for a playoff spot at that point.

The Bears promoted running back Taquan Mizzell from their practice squad, Rich Campbell of the Chicago Tribune tweets.

This will obviously hurt Chicago’s O-line. Long has dealt with numerous injuries in recent years but returned to be a well-regarded blocker in 2018. Pro Football Focus graded Long as the league’s No. 31 guard through seven games.

Eric Kush also missed Week 8, bringing second-round rookie James Daniels into the starting lineup for the first time. Daniels will be back with the first-stringers in Week 9. If Kush can’t go on Sunday, the Bears have former Chiefs interior lineman Bryan Witzmann and second-year UDFA Rashaad Coward as options. Kush, though, got in a full practice on Friday, placing him on track to be able to suit up Sunday.

Long played in 47 games during his first three NFL seasons — all Pro Bowl campaigns — but missed 14 games between the 2016-17 slates. He’ll add at least eight missed contests to that total. The Bears signed Long to a four-year, $40MM extension in September 2016. The veteran’s injury trouble began immediately after that deal was finalized.