Akiem Hicks‘ availability for Week 4 is very much in doubt. The Bears promoted defensive lineman Jonathan Harris from their practice squad. 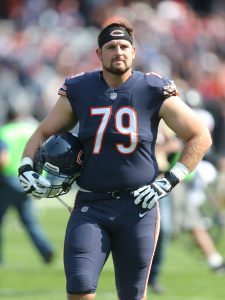 To make room on their 53-man roster for Robertson, however, the Bears released Bradley Sowell. The team had moved him from tackle to tight end this offseason. Sowell has been with the Bears since the 2017 season, having played in 34 regular-season games in that span.

Hicks left Monday night’s game with a knee injury and may now be on the wrong side of questionable to face the Vikings on Sunday. Harris was part of Chicago’s UDFA class but did not make the team out of training camp. The Bears stashed him on their practice squad.

It’s certainly possible Sowell could be brought back to the roster once Hicks is healthy. The Bears made this move last week, releasing Sowell and then re-signing him. Sowell, who played 11 snaps this season, is in his age-30 campaign. He’s been used strictly as a backup with the Bears but was a former regular starter with the Cardinals and Seahawks.