The Lions’ highly-regarded offensive line has taken another notable hit. Starting center Frank Ragnow will miss the team’s second game of the season, as noted by Dave Birkett of the Detroit Free Press. 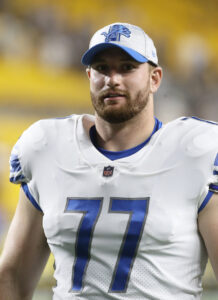 Groin and, more notably, toe injuries are the cause for the Pro Bowler’s absence. Birkett notes that Ragnow played through the ailments last week against the Eagles, but that the toe issue is on the same foot which caused him to undergo season-ending surgery last year.

That injury limited him to just four games in 2021, the first season after signing a then-historic extension which briefly made him the NFL’s highest-paid center. The former first-rounder has been a full-time starter since his rookie season, and played a key role in the Lions’ offensive line emerging as one of the best in the NFL. Any extended absence would deal a significant blow to the unit, which is already shorthanded.

The Lions have been without fellow starter Halapoulivaati Vaitai since the start of the year, so they will have only three-fifths of their best projected o-line against the Commanders. Just as he did after Ragnow’s injury last season, Evan Brown will step in at center. His play in 2021 – one sack allowed en route to an overall PFF grade of 66.8 – fell well short of Ragnow’s caliber of play, but, if repeated, could at least provide stability at the position.

Between the injuries up front, and the potential for top running back D’Andre Swift to sit out (or least play a more limited role) due to an ankle issue, head coach Dan Campbell admitted that the team’s offensive approach will need to be altered.

Whether with a run-heavy approach or a more pass-oriented attack utilizing the team’s upgraded pass-catching corps, the Lions will look to move to 1-1 on Sunday, with the hopes that Ragnow will be sidelined for far less time than he was last year.

Set to be a restricted free agent, Evan Brown is bypassing that process to stay with the Lions. The team’s Frank Ragnow replacement is staying on a one-year deal, Ian Rapoport of NFL.com tweets.

After Ragnow went down early in the season, Brown stepped in and started 12 games. Pro Football Focus graded the Lions’ O-line 13th, and while Brown checked in with the lowest grade among full-time starters, he posted a respectable mark for his position. This move bolsters the Lions’ depth for the 2022 season.

Brown’s deal is worth just more than $2MM, Doug Kyed and Brad Spielberger of PFF note (via Twitter). This salary comes in just below the right-of-first-refusal tender figure, the lowest of the RFA tender values.

The former UDFA out of SMU remains on track for unrestricted free agency in 2023. The Lions now have all five O-line starters and nearly their entire backup nucleus signed for next season.