Denzel Perryman is heading west again. The Raiders and Panthers agreed to a deal Wednesday night that will send the veteran linebacker to Las Vegas, Adam Schefter of ESPN.com tweets. The Panthers have announced the trade. 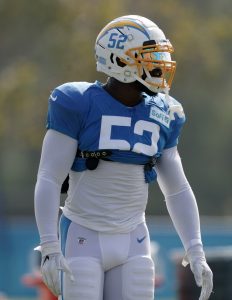 The former Chargers starter will return to the AFC West in a pick-swap trade, with the Panthers receiving a sixth-round pick and the Raiders acquiring Perryman and a seventh-rounder, per Schefter (on Twitter). This will represent another fresh-start attempt for Perryman and give the Raiders some help on their suddenly weakened defensive second level.

Carolina signed Perryman to a two-year, $6MM deal, guaranteeing the former second-round pick $2.99MM. The 28-year-old defender is due to earn base salaries of $990K and $1MM on this contract. The Panthers had seen Jermaine Carter perform well enough during training camp to anoint him as a starter alongside Shaq Thompson. Carter becoming Carolina’s starting middle linebacker left Perryman in limbo, a familiar position for the formerly supplanted Bolts starting inside ‘backer.

Las Vegas is currently down starter Nicholas Morrow, and Jon Gruden said the fifth-year Raider may be out a while. Backup Raiders linebacker Javin White is also on the mend, amplifying a need here. Perryman, however, has also battled injuries this year. He missed time at Panthers training camp due to a hip injury and is battling foot trouble after at teammate stepped on one of his feet this week, Joe Person of The Athletic notes (subscription required).

A bonus for Perryman’s hopes of stabilizing his career: this move will reunite him with former Chargers defensive coordinator Gus Bradley, whom the Raiders hired this year. Perryman, who will follow longtime Charger teammate Casey Hayward to Vegas, showed promise early in his career with the Bolts, recording 16 tackles for loss over his first two seasons. Injuries intervened over the next two seasons, but he later signed an extension to stay in Los Angeles. Despite the six-year vet’s playing time dwindling on that second Bolts deal — down to 31% of L.A.’s defensive snaps last season — Perryman graded as one of Pro Football Focus’ top run-defending linebackers in 2020.

Having seen his Chargers role reduced in recent years, Denzel Perryman will receive a fresh start in the NFC. The veteran linebacker intends to sign with the Panthers, Jeremy Fowler of ESPN.com tweets.

The Panthers are adding the six-year veteran on a two-year deal, Fowler adds (via Twitter). After Carolina took a low-cost swing with Tahir Whitehead to succeed Luke Kuechly last year, the team will bring in Perryman at middle linebacker.

Although the Bolts re-signed Perryman two years ago, they transitioned away from him upon trading up for Kenneth Murray in last year’s first round. While Murray experienced acclimation issues in Los Angeles as a rookie, Perryman played just 31% of the team’s defensive snaps last season. He should be expected to have a bigger role in Charlotte.

Various injuries have also plagued Perryman during his career. Hamstring and knee trouble ended his 2018 and ’19 seasons, respectively. While the 28-year-old linebacker has encountered myriad issues in his career, Pro Football Focus viewed his most recent work sample favorably. He graded as one of the top off-ball linebackers last season — a 48-tackle slate across 13 games. Perryman showed promise earlier in his career as well and will attempt to stabilize it in Carolina alongside Shaq Thompson.

Chargers linebacker Denzel Perryman will hit the open market. The 28-year-old has not ruled out a return to the Bolts, but he will first look to see what other clubs have to offer, as Ian Rapoport of NFL.com reports (Twitter link).

LA’s fortunes have been undermined by injuries in recent seasons, and Perryman has certainly dealt with his fair share of health problems. He appeared in only seven games in 2017, only nine the following year, and has never played in more than 14. Even in his injury-marred campaigns, though, he generally operated as a starter. But in 2020, he was utilized in more of a rotational role, starting a career-low six contests.

Despite that, 2020 may have been one of his best seasons. He scored a terrific 83.3 overall grade from Pro Football Focus — which would have been fifth-best in the entire league if he had met PFF’s snap minimum — and he demonstrated a marked improvement in his coverage abilities. Long lauded for his hard hitting and run-stuffing prowess, Perryman was more of a complete player last season, which certainly won’t hurt his value.

However, his injury history and the reduced salary cap are both working against him, and those factors could force him to accept a modest one-year pact, as many “middle class” free agents are expected to do in 2021. And with the Chargers also rostering younger players like Kenneth Murray, Drue Tranquill, and Kyzir White, Perryman may feel that a one-year deal on a club that will utilize him in a more prominent role will give him a better chance to make hay in 2022.

Los Angeles agreed to a restructure with linebacker Denzel Perryman that will keep him with the team for the 2020 season, a source told Ian Rapoport of NFL Network (Twitter link). Originally set to make a little over $6MM in the final year of his current deal, he’ll now need to hit some incentives to reach that figure, Rapoport reports. Perryman was due a $1.5MM roster bonus on the third day of the new league year, and there had been some speculation that the Chargers might move on.

The hard-hitting inside linebacker has been a big part of their defense the past handful of years when healthy, but he’s had some trouble staying on the field. He appeared in only seven games in 2017, only nine the following year, and has never played in more than 14. Linebacker has been a weak spot for the Chargers’ otherwise talented defense, and with the release of Davis it’s a position they’ll certainly be addressing further this offseason.

Perryman was drafted 48th overall out of Miami back in 2015. He also got in a bit of trouble with head coach Anthony Lynn last year, as he was sent home before the team’s game against Jacksonville after missing a team meeting.

It’s been more than a full day since the report that a deal was “close” to being done for Antonio Brown, but the Steelers haven’t moved yet. We still don’t have any word yet on where he’s heading, and it’s become clear that part of the holdup with trade negotiations is the fact that Brown wants a pricey new contract wherever he goes. After Odell Beckham Jr. signed his record-breaking deal last year, Brown “took note of the new money hitting the receiver market” and wanted to get in on it, writes Jeremy Fowler of ESPN.com.

While Brown has apparently been plotting on how to get a new contract for a while, Fowler does caution that the “notion that Brown sought a trade and publicly criticized his team solely over a new deal is misguided.” In his article, which is worth a full read, Fowler breaks down how Brown is “working the system” to get a huge new deal while he still has three years left on his current one with the Steelers.

Here’s more from around the AFC with the start of free agency right around the corner:

Despite Denzel Perryman‘s injury trouble over the past two seasons, the Chargers plan to give him another chance. They are re-signing the inside linebacker to a two-year contract, Ian Rapoport of NFL.com tweets.

A former second-round pick, Perryman has had stretches of quality play but has also been known for the time he’s missed. The Bolts’ top middle linebacker has been unavailable for 22 games during his career, 32 of which coming in the past two seasons.

But when he was healthy in 2018, Perryman was productive. Pro Football Focus graded the second-level defender as its No. 32 linebacker. The Chargers had to get creative at linebacker in the playoffs, using defensive backs in that role against the Ravens and Patriots. The strategy had mixed results, but the Bolts are hoping Perryman’s return can help stabilize the unit.

Following the New England defeat, Tom Telesco said he would make a point to address the team’s linebacker situation this offseason.

Perryman started 11 games during the 2016 season but underwent ankle surgery during the 2017 offseason before suffering a hamstring injury after returning late that season. Perryman’s 2018 campaign ended early because of an LCL injury. He will return to a promising Chargers team, albeit one that has experienced persistent injury trouble on both sides of the ball in recent years.

The Chargers are working to retain linebacker Denzel Perryman before he hits free agency, sources tell NFL.com’s Ian Rapoport (Twitter link). Perryman has dealt with injuries in the past, but he has been a real difference-maker when healthy.

Last year, Perryman suffered LCL and hamstring injuries and had to be shut down in November. Before that, the 26-year-old tallied 51 total tackles and an interception across nine games. The inside linebacker didn’t log any sacks, but, at the time of his injury, he ranked as Pro Football Focus’ 23rd best linebacker on the strength of his pass rush pressure.

Perryman, a second-round pick in 2015, is no stranger to the injury bug. In 2017, Perryman started the year on IR and went right back after seven games. Still, the Chargers are hopeful that he can stay on the field and provide the team with continuity in the front seven.

If Perryman is re-signed, the Bolts will more or less have the band back together, though defensive tackle Corey Liuget could be out after the club declined his 2019 option.

Chargers star linebacker Denzel Perryman suffered an injury to his LCL and probably needs hamstring surgery as well, Ian Rapoport of NFL.com (on Twitter) hears. The double whammy will land him on injured reserve, ending his season.

The Chargers have been one of the league’s surprise successes this season and Perryman deserves serious credit for their 7-2 start. Through nine games, the 25-year-old (26 in December) tallied 51 total tackles and an interception. The inside linebacker doesn’t have any sacks, but he is ranked as Pro Football Focus’ 23rd best linebacker on the strength of his pass rush pressure.

Perryman, a second-round pick in 2015, is no stranger to injury. Last year, Perryman started the year on IR and went right back after seven games.

Without Perryman, the Chargers will likely turn to Korey Toomer or Nick Dzubnar in the middle. It also stands to reason that they’ll add a linebacker, especially since Kyzir White is on IR and Chris Landrum is healing up from a hip injury.