JANUARY 20: Neither Cappa nor Williams will play against the Bills. Taylor ruled out the starting right guard and left tackle for Sunday’s divisional-round game. With Collins done for the season, this will push three Cincinnati second-string blockers into the lineup against Buffalo.

JANUARY 16: When the Bengals reconvene with the Bills, their offensive line could be in much worse shape compared to when the teams began their Week 17 game that ultimately ended up cancelled. Jonah Williams suffered a dislocated kneecap during Sunday night’s win over the Ravens, Ian Rapoport of NFL.com tweets. 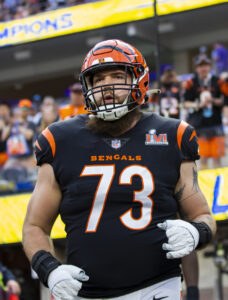 Zac Taylor called Williams “week to week,” though this injury can sideline players for an extended time period. Neither Williams nor right guard Alex Cappa could walk without assistance Sunday, Kelsey Conway of the Cincinnati Enquirer notes, providing a grim glimpse of the Bengals’ O-line situation for their divisional-round game. Injured during Cincy’s Week 18 game against Baltimore, Cappa is battling an ankle malady and is also on a week-to-week timetable.

For what it’s worth, Williams has a recent history of playing through this injury. The former first-round pick sustained a dislocated kneecap in the Bengals’ first matchup with the Ravens and did not miss any time. He returned the following week and did not miss a snap for the rest of the regular season. The 2019 first-rounder has rebounded from his lost rookie season — nullified because of a shoulder injury — and has been a vital part of Cincinnati’s O-line over the past three years. The Alabama product will be going into a contract year in 2023.

The Bengals already have La’el Collins out for the season due to a Week 16 ACL tear. Cappa and Williams’ absences in the Ravens rubber match helped lead to four Joe Burrow sacks, with former second-round pick Jackson Carman struggling. Carman replaced Williams at left tackle, playing the blindside post for the first time as a pro. The Bengals benched Carman during his 2021 rookie season, and despite the Clemson product being favored to win the left guard competition this year, he did not do so and only played four regular-season snaps.

A line featuring Carman, Max Scharping and Hakeem Adeniji will be quite different from the one housing Williams and offseason additions Cappa and Collins. Scharping was unable to catch on as a regular Texans starter, bouncing in and out of Houston’s lineup despite a second-round pedigree, and did not make the rebuilding team’s 53-man roster this year. A former sixth-round Bengals draftee, Adeniji has started 15 career regular-season games and five postseason contests — including all four last season. The Bengals attempted to upgrade by adding Collins, but Adeniji will be back in place next week in Buffalo. It remains to be seen whether Williams or Cappa will be able to join him.

The Bengals fell just short of their first ever Super Bowl win in their third appearance in the league’s season finale. As the final seconds ticked away, analysts’ fingers started pointing, with many of them directed at Cincinnati’s lackluster offensive line. 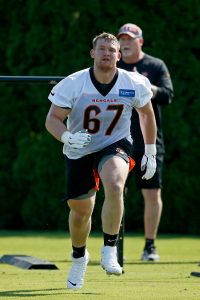 In their loss to the Los Angeles Rams, the Bengals fielded Trey Hopkins at center, Jonah Williams at left tackle, Isaiah Prince at right tackle, Hakeem Adeniji at left guard, and Quinton Spain at right guard. Hopkins and Spain are free agents, no longer on the roster. Adeniji and Prince retain their roster spots, but are no longer projected to start. Williams, perhaps the only bright spot on the line last year, will return as the blindside blocker.

The Bengals worked ferociously in the offseason to address their deficiencies on offensive line. They signed three free agent offensive lineman who are all expected to come in and start right away. Ted Karras comes to Cincinnati after starting experience at center in both New England and Miami. Alex Cappa comes to town after three strong seasons as the Buccaneers’ starter at right guard. La’el Collins is ready to bookend the line with Williams after years of starting experience at right tackle in Dallas.

With Karras at center, Collins and Williams at tackle, and Cappa at right guard, that leaves one position up for grabs. The current favorite to start at left guard is 2021 second-round draft pick Jackson Carman. Carman served mainly as a backup last year for the Bengals earning six starts on the year while playing in every game. The main concern with starting Carman is the fact that he couldn’t supplant any of the lackluster starters from last year. Perhaps with a year of NFL football under his belt now, Carman will blossom into a strong starter at left guard.

The other favorite to man the last spot on the offensive line comes from Cincinnati’s most recent draft class, according to Ben Baby of ESPN. The Bengals used one draft pick this year on an offensive player, bestowing that honor upon the 23-year-old tackle out of North Dakota State, Cordell Volson. Volson served as the Bison’s right tackle in his last college years, but had experience at all four guard and tackle positions during his time in Fargo. That versatility will certainly come in handy as many college tackles tend to move to an interior lineman position if they aren’t projected to dominate as a tackle at the next level. Volson is sure to give Carman a run for his money as the Bengals look to put the finishing touch on their full offensive line renovation.

All the players mentioned above are the favorites to contribute on the offensive line this year, but the following players will attend camp with the hopes of stealing a starting job. At center, Cincinnati also rosters Trey Hill, Lamont Gaillard, and undrafted rookie Ben Brown. At guard, the Bengals’ roster lists D’Ante Smith and undrafted rookie Desmond Noel. The only tackle on the roster that wasn’t already mentioned is undrafted rookie Devin Cochran.

The Bengals have exercised left tackle Jonah Williams‘ fifth-year option, Ian Rapoport of NFL.com tweets. As a result, Williams will remain under Bengals control through the 2023 season.

Although he was the 11th overall pick of the 2019 draft, Williams didn’t play as a rookie because of left shoulder problems. However, the former Alabama standout has since developed into a key member of the Bengals’ offensive line. Williams has started in all 26 of his appearances, including 16 last season for the AFC champions.

While Cincinnati could work out an extension with quarterback Joe Burrow‘s blindside protector sometime soon, the club currently doesn’t have to worry about losing Williams for at least another couple of years. Williams, 24, is due to earn $12.6MM in 2023 under his option.

The Bengals have placed offensive tackle Jonah Williams on injured reserve, per a club announcement. In a corresponding move, they’ve activated cornerback Darius Phillips from IR.

Between Williams and quarterback Joe Burrow, the club’s last two first round picks have landed on IR. It’s especially frustrating for Williams, who lost his would-be rookie season in 2019 with a lorn labrum. He returned this year, though he was briefly interrupted by a neck stinger in Week 7. On Sunday, he was forced out by a knee injury, and it appears to be a season-ender. Williams can technically return after three games, but there are only four games to go and they won’t mean much for the 2-9-1 Bengals.

The good news is that Williams is not believed to have torn a ligament. He’s looking at a fairly straight-forward rehab, which is more than the Bengals can say for Burrow following reconstructive ACL surgery.

Offensive tackle Jonah Williams will return to practice for the Bengals, per a club announcement. The No. 11 overall pick has yet to make his NFL debut due to a shoulder injury he suffered in the preseason, so this is a promising step forward.

Williams can practice for the rest of the season without counting against the 53-man roster limit. In theory, they could activate him before the end of the year, but it’s not clear whether that’s part of the plan. Given that this is a lost season, they might take the cautious approach and leave him out of harm’s way.

Before the injury, Williams was slotted to start at left tackle for the Bengals. That’s likely where he’ll be stationed in 2020, when the Bengals hope to get back on track.

Bengals head coach Zac Taylor says he does not expect first-round pick Jonah Williams to play this season (Twitter link via ESPN.com’s Ben Baby). The team will monitor the tackle over the next few weeks, but there’s little sense in rushing him back on to the field in a lost season.

Williams was slotted to start at left tackle before suffering a left shoulder injury. Unfortunately, Williams was just one of several banged up Bengals this season, putting a major damper on Taylor’s first year.

Still, the future is bright for Williams, who was on track to be a Top 10 pick before the Giants shocked the world by taking Duke quarterback Daniel Jones at No. 6 overall. The early shakeup led to the Jaguars taking Kentucky edge rusher Josh Allen at No. 7, which allowed the Lions to opt for Iowa tight end T.J. Hockenson at No. 8 instead of Williams. That worked out just fine for the Bengals, who were able to stand pat and land the best tackle in this year’s class.

Next year, they should find out exactly how good Williams is.