The Cardinals have made an upgrade at kicker. They signed the specialist who holds the record for the NFL’s longest field goal, agreeing to terms with former Broncos and Lions kicker Matt Prater. 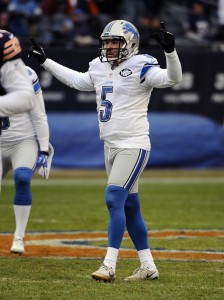 Prater spent the past seven seasons in Detroit. He will migrate to the desert for his age-37 season. Prater will replace Zane Gonzalez, whose struggles down the stretch contributed to the Cardinals slinking out of the 2020 playoff race.

Prater’s deal is worth $7MM over two years, Ian Rapoport of NFL.com tweets. He will rejoin former Broncos special teams coordinator Jeff Rodgers with the Cardinals.

He of a 64-yard field goal during his final Broncos season (2013), Prater continued his long-range mastery in Detroit. He connected on a 59-yard game-winner last season and was successful from at least 58 yards in three other Lions seasons. Prater made just 21 of 28 field goals last season but has two Pro Bowls on his resume.

The Cardinals cut Gonzalez last week. While his six misses (16 of 22) were fewer than Prater’s misfire count, Gonzalez missed some key kicks in Cards losses. Most notably, his 49-yarder that fell short of the goal posts led to the Cards losing to the Dolphins in a late-season shootout. GM Steve Keim moved swiftly to address the deficiency.

Just days after Terrelle Pryor was placed on season-ending injured reserve, the Redskins’ pass catchers received another blow on Wednesday. The team’s star tight end Jordan Reed was ruled out for the team’s Thanksgiving tilt with the Giants, according to Kimberly Martin of the Washington Post (Twitter link).

The oft-injured Reed, who was labeled as questionable by head coach Jay Gruden an hour before the announcement, will miss his sixth game of the year. Reed also missed four games in 2016 and two during his breakout 2015 season.

There are few better tight ends than Reed when he is on the field. Of the 11 players at his position to record 250 receptions since 2013, he is the only one to average at least five receptions per game. The team will once again turn to Vernon Davis in the division clash on Thursday night.

The Lions exercised their 2017 contract option on kicker Matt Prater earlier this spring, Dave Birkett of the Detroit Free Press tweets. However, the decision didn’t change much for the veteran (Twitter link). Prater received his $750K as a bonus this year instead of base salary and his contract for 2017 is non-guaranteed. So, despite triggering Prater’s option, the Lions could part ways with him without penalty, if they so choose.

Prater, 32 in August, re-signed with the Lions on a two-year, $4.55MM deal which included a third-year team option. With the third year factored in, the overall value of the pact is believed to be roughly $9MM.

Prater began the 2014 season by serving a four-game suspension in Denver for violating the league’s substance abuse policy, and was ultimately cut by the Broncos, ending a seven-year tenure with the club. After signing with the Lions, Prater was a little shaky in his first few games, but settled down and ended up making 21 of 26 field goal attempts. In 2015, Prater sank 22 of his 24 field goal attempts while connecting on 36 of 39 extra point tries.

Here are some key details on some of the notable contracts agreed to or signed around the NFL this week:

After running through a gauntlet of inconsistent kickers early in the 2014 season, the Lions settled on veteran Matt Prater, and now the team is prepared to roll with Prater for 2015 and beyond. According to Mike Klis of the Denver Post, the two sides have agreed to terms on a three-year contract. Ian Rapoport of NFL.com reports (via Twitter) that Prater’s three-year deal will be worth $9MM.

“I am thankful for this opportunity and excited to come back to Detroit,” Prater said in a statement, via a team release confirming the agreement. “I hope to do my part to help this team win. … I am also looking forward to returning and working with both Sam [Martin] and Mule (Don Muhlbach). We had to adjust quickly to each other in the middle of the season, and this off-season will be valuable in our preparation for the coming year.”

Prater, 30, began the 2014 season by serving a four-game suspension in Denver for violating the league’s substance abuse policy, and was ultimately cut by the Broncos, ending a seven-year tenure with the club. After signing with the Lions, Prater was a little shaky in his first few games, but settled down and ended up making 21 of 26 field goal attempts. In 2013, he was a Pro Bowler, making all but one of 26 field goal attempts for the Broncos.

Head coaches and general managers continue to speak to the media at press conferences in Indianapolis, and we’ve already rounded up the highlights from several of them so far today. Here are a few more noteworthy comments from some NFL decision-makers, with all links go to the Twitter accounts of various reporters in attendance: