The Ravens are keeping one of their most unique and important players on offense. The team announced the re-signing of Patrick Ricard to a three-year deal. 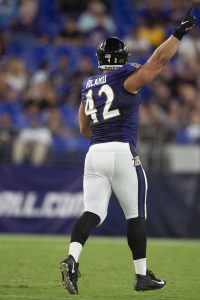 Ricard, 27, has worn a number of hats during his time in Baltimore. He joined the team as a UDFA in 2017, where he established himself as an increasingly rare two-way player. The six-foot-three, 310-pounder spent time as a rotational defensive linemen, in addition to his now-familiar fullback role.

That trend of playing part-time on both sides of the ball began to change in 2019, when Ricard’s effectiveness as a fullback became more apparent. That was the first of three consecutive Pro Bowl appearances for him at the position, as his role in the team’s offense has progressively increased. In 2021, the Maine product played more than 50% of the Ravens’ offense snaps for the first time, playing exclusively with that unit for the second straight season.

Ricard has also been aligned as a tight end with more regularity in recent years. In addition to his blocking prowess, he has registered 25 catches for 155 yards and three touchdowns over the past three campaigns. Together with traditional TE Nick Boyle, Ricard has played a key role in Baltimore’s rushing success. Given the former’s injury concerns, keeping Ricard in the fold was one of the Ravens’ top offseason priorities.

Jeff Zrebiec of The Athletic reports (on Twitter) that the contract is expected to average roughly $4MM per season. That figure would rank Ricard second in the league amongst fullbacks, behind only Kyle Juszczyk. Regardless of the exact compensation level, ‘Project Pat’ is set to remain in Baltimore for the foreseeable future. 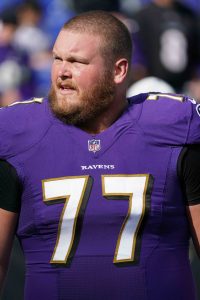 The Ravens have opened extension talks with fullback/defensive lineman Patrick Ricard, according to Nick Underhill of The Athletic (Twitter link).

Ricard, 25, entered the league as an undrafted free agent out of Maine in 2017. A full-time defensive lineman at the collegiate level, Ricard has played both defensive line and fullback with Baltimore. During his rookie campaign, Ricard played 149 snaps on offense and just 38 on defense while catching four passes for 12 yards and two touchdowns. In 2018, however, his playing time was reduced even further, as he saw only 94 snaps on offense and 47 on defense.

Because Ricard was undrafted, he can be extended after two NFL seasons, whereas drafted players must wait until their third pro year is complete before working out a new deal. Ricard will be a restricted free agent in 2020, so by agreeing to an extension, he could potentially sacrifice some contractual upside for the financial security of a long-term pact.