The second of the Ravens’ two 2022 first-round picks signed his rookie contract Thursday. Tyler Linderbaum is now under contract through 2025, with his fifth-year option giving Baltimore a chance to keep him on this deal through 2026. 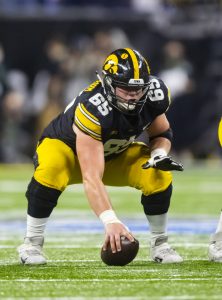 Baltimore obtained a second first-round selection by trading Marquise Brown to Arizona during the draft’s first night and traded down from No. 23 to No. 25 overall, allowing Buffalo to climb up for cornerback Kaiir Elam. Soon after, the Ravens drafted Linderbaum, the first center off the 2022 board.

The Iowa product will be expected to take over Ravens pivot responsibilities immediately. The team let 2021 snapper Bradley Bozeman sign with the Panthers. Baltimore will replace Bozeman with last year’s first-team All-American center. While Linderbaum received countless accolades last season, he was also a Rimington Trophy finalist in 2020. The Hawkeyes used Linderbaum as their starting center in 2019 as well, deploying an offensive line that featured two eventual first-round picks — Linderbaum and Tristan Wirfs.

Baltimore had not drafted an interior offensive lineman in the first round since Ben Grubbs 15 years ago. Linderbaum is the first center the Ravens have drafted in Round 1, providing a runway to a long career. Linderbaum joins Ronnie Stanley as Ravens first-round O-linemen, with veterans Kevin Zeitler and Morgan Moses set to accompany them up front.

Despite being the top-ranked center on nearly everybody’s boards going into the 2022 NFL Draft, Iowa lineman Tyler Linderbaum may not hear his name called on Day 1 of the Draft. According to Tony Pauline of Pro Football Network, not one team he spoke to had a first-round grade on Linderbaum.

Analysts’ early looks haven’t quite reflected this grade. Dane Brugler of The Athletic has Linderbaum as his 17th best overall prospect, placing him firmly as a first-round talent. The NFL Network’s Daniel Jeremiah’s most recent rankings are a bit more in line with Pauline’s assertion, placing Linderbaum as the 32nd best prospect in the Draft, a borderline first-rounder. Pauline claimed that every team had early second-round grades on the 22-year-old.

The top center in last year’s Draft was Alabama’s Landon Dickerson, who was chosen by the Eagles with the fifth pick of the second round. In 2020, Michigan’s Cesar Ruiz was taken by New Orleans with the 24th pick of the first round. Both players have spent most of their playing time at guard, starting most games for their respective clubs. Before that, Garrett Bradbury was selected by the Vikings with the 18th overall pick in 2019. Frank Ragnow and Billy Price were chosen with back-to-back picks by the Lions and Bengals, respectively, the year before. While Price no longer wears orange and black after being traded to the Giants, all three have become starting centers, with Ragnow earning Pro Bowl honors at the position.

All this to say that returns on top-drafted centers are hard to read. Some end up as utility interior linemen on teams with already established centers; Ruiz shifted to the side of Erik McCoy and Dickerson playing around Jason Kelce. They may be the heir apparent once their predecessor departs, but for now they’re too talented to keep off the field. Price lost his starting center position in Cincinnati, but regained snapping duties in New York. Bradbury and Ragnow have both been solid-to-good starters for middling teams.

There may just not be a huge need for centers right now. Like quarterbacks, a team only utilizes one center on a regular basis, meaning there are usually no more than 32 starting jobs in the league. If every team is completely comfortable with their situation in the middle, then a first-round pick might be too high a price to bring in Linderbaum. Yet, seeing how consistently Rimington Trophy finalists have come in and produced, this could just be a reflection of how teams view his talent. Linderbaum may just be a Day 2 pick.

Pauline also reported that his research of teams’ offensive line boards show college tackles like Kentucky’s Darian Kinnard, UCLA’s Sean Rhyan, Central Michigan’s Luke Goedeke, and North Dakota State’s Cordell Volson as guards on most teams’ boards. This is not entirely uncommon, especially for Goedeke and Volson, being from smaller market schools. Being a dominant offensive tackle at the NFL level demands much more than at the college level. Consistent pressure from NFL-sized defensive linemen requires size, strength, and length that isn’t always necessary in the NCAA. It’s fairly commonplace to see good tackles who maybe aren’t first-round talents make their case as a larger guard with frequent success.