The Chiefs had two picks to work with on Day 1 of last week’s draft. The first was used to help bolster their secondary, while the second, edge rusher George Karlaftis, will add to their front seven. Kansas City has agreed to terms with him on his rookie deal, reports ESPN’s Adam Schefter (Twitter link). 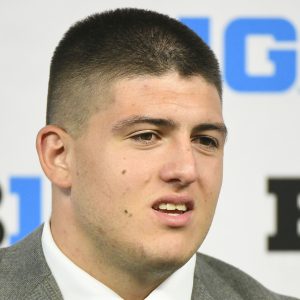 Karlaftis had a productive three-year career at Purdue. His freshman season was his best, as he totalled 54 tackles, including 17 for a loss, as well as 7.5 sacks. While he was limited to just two games the following year, he bounced back in 2021, earning Third-Team All-American honors.

One of the best power rushers in this year’s class, the Greece native has the frame (six-foot-four, 275 pounds) to hold up against NFL competition. Given his build and lack of fluidity relative to other edge players, though, there are questions surrounding where he would best be served to line up, especially early in his career. Still, his combination of size, technique and upside left no one surprised when the Chiefs selected him 30th overall.

In Kansas City, Karlaftis will join an edge group headed by Frank Clark. The team’s recent decision to use a UFA tender on veteran Melvin Ingram points to a re-signing in the near future, but Karlaftis should still be able to see significant playing time right away and throughout his four- (or five-) year tenure on his rookie deal.

After breaking out in his lone Alabama season, Jameson Williams encountered a significant hurdle to close his junior year. The ACL tear Williams suffered in the national championship game damaged his pre-draft stock, but it appears to be rebounding. Williams is now expected to be taken in the top 10, Chris Mortensen of ESPN said recently (h/t Eliot Shorr-Parks of 94WIP.com; Twitter link). ESPN ranks Williams as its No. 4 wideout prospect, at No. 19 overall, behind ex-Ohio State teammates Garrett Wilson and Chris Olave and USC’s Drake London. When available in 2021, the slender Crimson Tide wideout showed game-breaking speed in a monster statistical season. The 6-foot-1 transfer get totaled 1,572 yards (19.9 per catch) and 15 touchdowns. That total surpasses other first-round Tide wideout draftees like Julio Jones, Jerry Jeudy and Jaylen Waddle‘s final-season production at the SEC powerhouse. ACL tears are obviously not the deterrents they once were, and teams eyeing Williams through a long-range lens would make sense.

Here is the latest from the draft:

Purdue defensive end George Karlaftis will enter the 2022 NFL Draft, according to head coach Jeff Brohm (via Tom Dienhart of Gold and Black). This was the expected move as Karlaftis is regarded as one of the best edge rushers in this year’s class.

“They will not be coming back to play next year,” Brohm said over the weekend. “They will be moving on.”

Mel Kiper of ESPN currently has Karlaftis ranked 21st on his Big Board. He’s registered just 4.5 sacks this season, but the 6’4″, 270-pounder has consistently brought the pressure. As a frosh in 2019, his only other full season, he registered 7.5 sacks and 17 tackles for loss. In 2020, a positive COVID-19 test limited him to just three games.